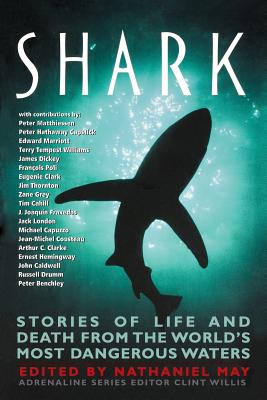 Shark picks up where previous Adrenaline titles such as Rough Water and Deep Blue left off, with a collection focusing on man's terrifying interactions with one of the planet's most frightening beasts -- an animal that arouses our most primal fears -- fears that were recently brought to the surface by an outbreak of fatal attacks on this country's beaches. From novelists to sailors to oceanographers to divers, man's encounters with sharks have produced a diverse body of gripping, often inspired writing by great names in adventure literature. Along with 16 black-and-white photos, selections feature a wide range of work with an emphasis on thrills and chills, including Peter Matthiessen on the great white shark, Edward Marriott on hunting man-eaters off Nicaragua, Richard Fernicola's account of the 1916 shark attacks that inspired Peter Benchley's Jaws, and Jacques Cousteau's studies of the creatures.

Nathaniel May has swum in three of the world's oceans -- the Atlantic, the Pacific and the Indian -- without encountering a single shark. He graduated from Davidson College in 1995, and has worked as a freelance writer and photographer. He lives in Portland, Maine.

Clint Willis is the series editor of Adrenaline Books. His anthologies for the series include Epic and Adrenaline 2001.
Loading...
or support indie stores by buying on