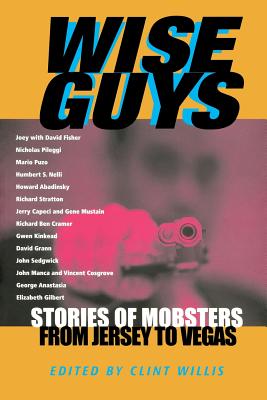 Stories of Mobsters from Jersey to Vegas (Adrenaline)

Wise Guys takes readers into the heart of Sopranos territory, with a collection featuring the work of best-selling writers from E. L. Doctorow (with an account of mobster Dutch Schultz that includes one of the great execution scenes in the literature of the Mob) to Nicholas Pileggi (on Henry Hill's first prison term, overflowing with good pasta and booze). Other pieces include Jerry Capeci and Gene Mustain reconstruction of the vicious hit on "Big Paulie" Castellano outside of Spark's Steakhouse (which catapulted John Gotti to leadership of the Gambino family), Mario Puzo's riveting account of a don's ascent (a tale of deceit, murder and, above all, cunning), and Norman Lewis on where it all began: the Sicilian Mafia's battle against Mussolini and its return to greater strength than ever.

Clint Willis has published more than forty books, including anthologies on topics such as adventure, politics, relgion, and war. His work has appeared in hundreds of publications, including Men's Journal, Outside, and the New York Times. His work has also been nominated for the American Society of Magazine Editors' National Magazine Award.
Loading...
or support indie stores by buying on