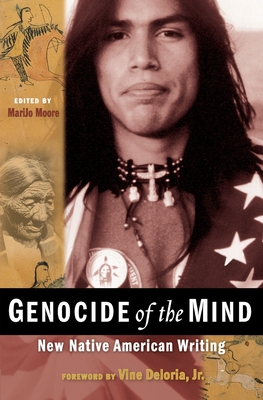 Genocide of the Mind

After five centuries of Eurocentrism, many people have little idea that Native American tribes still exist, or which traditions belong to what tribes. However over the past decade there has been a rising movement to accurately describe Native cultures and histories. In particular, people have begun to explore the experience of urban Indians -- individuals who live in two worlds struggling to preserve traditional Native values within the context of an ever-changing modern society. In Genocide of the Mind, the experience and determination of these people is recorded in a revealing and compelling collection of essays that brings the Native American experience into the twenty-first century. Contributors include: Paula Gunn Allen, Simon Ortiz, Sherman Alexie, Leslie Marmon Silko, and Maurice Kenny, as well as emerging writers from different Indian nations.

MariJo Moore (Cherokee) is the author of Crow Quotes, Spirit Voices of Bones, Tree Quotes, Red Woman with Backward Eyes, and other stories. Her work has appeared in National Geographic and the New York Times Syndicated Press.

Vine Deloria Jr. (Standing Rock Sioux) is a respected elder and the author of many books including God is Red, A Native View of Religion, and the bestselling Custer Died for your Sins.
Loading...
or support indie stores by buying on