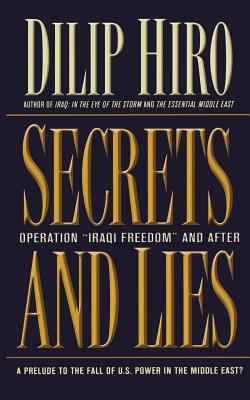 Operation Iraqi Freedom and After: A Prelude to the Fall of U.S. Power in the Middle East?

The Anglo-American invasion of Iraq, masterminded by U.S. President George W. Bush and UK Prime Minister Tony Blair, is the single most important event since the collapse of the Soviet Union in 1991. Just as that break-up ushered in a new era in international relations following the end of a bipolar world system, this war has given a new twist to the present global order. Secrets and Lies tells in detail how Operation Iraqi Freedom came about, what it means and where it is likely to lead the Middle East and the world at large. It reveals the scope of the "dirty tricks" used by the Anglo-American alliance to sell the war through the phony intelligence reports and the exaggeration of Saddam's possession of weapons of mass destruction. It examines the media campaign to win hearts and minds -- including the stage management and spin surrounding the rescue of Private Jessica Lynch. Picking up from the author's recently celebrated essay in the New York Times, "Why the Mullahs Love a Revolution," this leading authority on the Middle East provides us with his skeptical view of "Operation Iraqi Freedom" and his examination of the future in Middle East.

Dilip Hiro is one of the world's leading experts on the Middle Eastern, Central and South Asian, and Islamic affairs. His thirty-four books include Inside India Today, The Timeline History of India, Inside Central Asia, and Apocalyptic Realm: Jihadists in South Asia. He contributes to the New York Times, Guardian, Observer, Nation, and Los Angeles Times as well as Salon, TomDispatch, and YaleGlobal. He is a commentator for CNN, the BBC and Al Jazeera English.
Loading...
or support indie stores by buying on