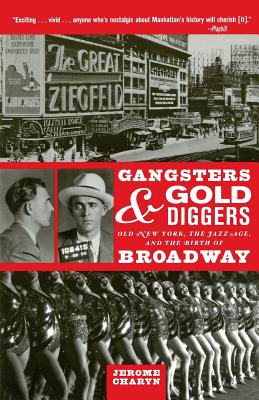 Old New York, the Jazz Age, and the Birth of Broadway

In this rousing tribute to an unforgettable time and place, Jerome Charyn picks up where Gangs of New York left off and transports readers back to a swaggering, golden era in American life—the Roaring Twenties—when Broadway the street exploded into Broadway the legend. Charyn looks at the men and women who helped make the Big Street the most glamorous place on the planet, from Mae West to Fanny Brice, Legs Diamond to Irving Berlin, Scott Fitzgerald to Arnold Rothstein, and many more. In cinematic prose and numerous photographs, Charyn captures Broadway's vagabondage, outlaw culture, and self-mythologizing. He brings a rollicking, rough-and-tumble period in New York history to life—conjuring an intoxicating portrait of Jazz Age excess by examining the denizens of that greatest of all "staggering machine[s] of desire," the street known as Broadway.

Jerome Charyn was born in the Bronx in 1937. His novel The Green Lantern was one of the five finalists for the 2005 PEN/Faulkner Award for Fiction and he is the author of more than thirty books. A film professor as well as a novelist and essayist, he is currently Distinguished Professor of Film Studies at the American University of Paris.
Loading...
or support indie stores by buying on