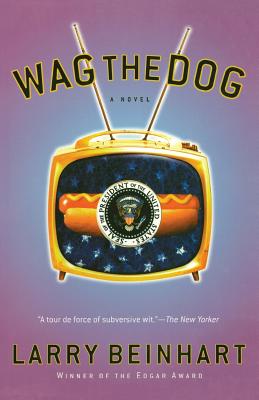 Once upon a time there was a mean, dying GOP chairman who had a brilliant scheme to assure that his man would retain the office of president of the United States of America. And the only man who could pull off this elaborate plan was a celebrated Hollywood director. Add to the mix a left-coast gumshoe named Broz who is trapped among cover-ups, undercover work, and his own morality, a cast of bicoastal desperate characters, and the stage is set for a powerful D.C./L.A. production. From Edgar award winning author Larry Beinhart, Wag the Dog was the most brilliant political satire of the last decade. It was made into a classic film by Barry Levinson, and, fortunately, is now back in print.

Larry Beinhart is best known as the author of Wag the Dog (originally published as American Hero) on which the film starring Robert DeNiro, Dustin Hoffman, Willie Nelson and Woody Harrelson was based. His No One Rides for Free (1986) received the 1987 Edgar Award for Best First Novel. His most recent book, Fog Facts, a work of nonfiction, examines why some important, even striking, truths are overlooked by the media and the culture at large.

Beinhart spent two years in Oxford, England, where he was the Raymond Chandler Fulbright Fellow at Wadham College. He is a regularly featured blogger on Huffingtonpost.com and his articles have appeared in the New York Times, the International Herald Tribune, the Los Angeles Times, the Washington Post, the Baltimore Sun, and the Chicago Tribune. He resides in Woodstock, New York, with his wife and two children.
Loading...
or support indie stores by buying on