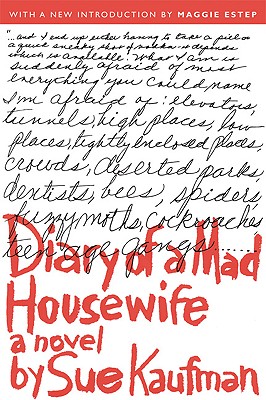 Diary of a Mad Housewife

The classic, bestselling novel of Central Park West ennui -- and a seminal piece of urban women's fiction that remains influential today (Bridget Jones's Diary, et al) -- back in print after many years

Made into a major motion picture that garnered an Oscar nomination, Diary of a Mad Housewife is a classic of women's fiction that gave a wry voice to the nascent feminist stirrings of the 1960s and helped incite a revolution in the consciousness of a generation. After many years, this best-selling novel of Manhattan ennui is finally back in print.

When Bettina Balser begins to suspect that she is going mad, she starts a secret diary as a form of therapy and escape. Her fears pour onto the page: Elevators, subways, bridges, tunnels, high places, low places, tightly enclosed spaces, boats, cars, planes, trains, crowds. . . . Through her observations of herself and those around her, Bettina seeks meaning in her exceedingly dreary life. Her frank examinations lead to many changes, including an extramarital fling, and her voice touches a timeless nerve, resonating on many levels -- from the ever-evolving feminist consciousness to the gnawing existential search that is universal.

Diary of a Mad Housewife's humor and insight are as alive and pertinent today as they were yesterday, and will charm and disarm men and women of any generation.

SUE KAUFMAN was born in 1926 in New York City, where she lived until her death in 1977. Since 1980, the American Academy of Arts and Letters has honored her memory with the Sue Kaufman Prize for Fiction.
Loading...
or support indie stores by buying on