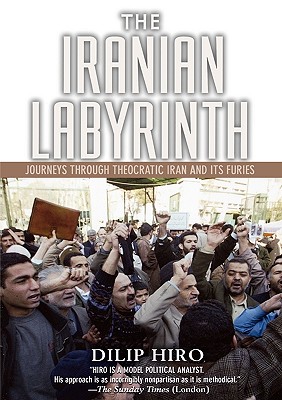 Journeys Through Theocratic Iran and Its Furies

As Tehran faces a crisis in its escalating showdown with the International Atomic Energy Agency regarding its nuclear program, renowned Middle East expert Dilip Hiro clears the way through the labyrinth that defines today's Islamic Republic. In a country stereotyped as fundamentalist by America, Hiro finds a contradictory land -- where black chador-clad women are the majority at universities, Iranian films are shown at international festivals, and human rights lawyer Shirin Ebadi is a Nobel Peace Prize Laureate. Drawing on Iran's rich history, its vast oil and gas reserves, and its unique strategic importance, Hiro reveals a complex nation whose theocratic rulers are struggling to prove that Islamic democracy is a viable and enduring social system.

Dilip Hiro is one of the world's leading experts on the Middle Eastern, Central and South Asian, and Islamic affairs. His thirty-four books include Inside India Today, The Timeline History of India, Inside Central Asia, and Apocalyptic Realm: Jihadists in South Asia. He contributes to the New York Times, Guardian, Observer, Nation, and Los Angeles Times as well as Salon, TomDispatch, and YaleGlobal. He is a commentator for CNN, the BBC and Al Jazeera English.
Loading...
or support indie stores by buying on