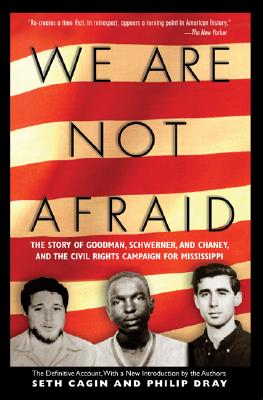 We Are Not Afraid (Paperback)

The Story of Goodman, Schwerner, and Chaney, and the Civil Rights Campaign for Mississippi

We Are Not Afraid is the story of the 1964 killing of James Chaney, Andrew Goodman, and Michael Schwerner in Philadelphia, Mississippi, at the hands of Ku Klux Klansmen and the local cops. Described as "one of the best books on the civil rights movement," the murders it describes inspired the acclaimed film, Mississippi Burning.

The events surrounding this seminal event have re-entered public debate due to the recent conviction of manslaughter by Klansman and Imperial Wizard, Edgar Ray Killen, for his part in orchestrating the murders. As America struggles to honestly confront its history of racism, there has never been a more timely moment to reissue this fully updated edition of We Are Not Afraid. From the roles played by such figures as Martin Luther King, Jr. and Robert Kennedy to the remarkable courage of the Freedom Riders, this book relates the definitive story of a nation's ongoing battle for true democracy.

PHILIP DRAY is the author of At the Hands of Persons Unknown which won the Robert F. Kennedy Memorial Book Award and the Southern Book Critics Circle Award for Nonfiction and was a finalist for the Pulitzer Prize. He latest book is Stealing God's Thunder. Dray lives in Brooklyn, NY. Seth Cagin is the co-author of Born to Be Wild and Between Earth and Sky, a history of ozone depletion. He and his wife Marta Tarbell are the founders and publishers of the local newspaper, The Telluride Watch.He lives in .