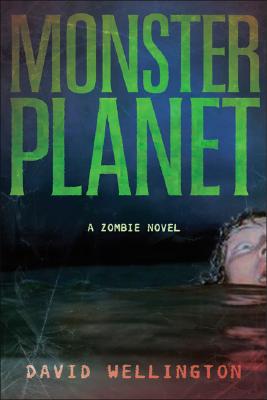 Set twelve years after the shambling zombie masses have overrun Manhattan, America, and the world, Monster Planet is the mind-blowing conclusion to what must be the scariest trilogy ever. Oceans of blood, scattered limbs, wanton violence, and general mayhem abound, along with revivified mummies, a Welsh sorcerer, and Wellington's signature brand of cool high-tech weaponry and sly humor -- zombies, after all, are the ultimate consumers. What do the undead want, aside from fresh meat? Do the steadily diminishing number of humans who have somehow managed to survive over a decade of living hell stand a chance on a planet where they've been reduced to the status of prey? It all ends here, on Monster Planet.

David Wellington was born in Pittsburgh, Pennsylvania in 1971. He attended Penn State and received there an MFA in creative writing. He works as an archivist for the United Nations in New York City.

In 2003 he began work on the website www.monsternovel.com, where his novel Monster Island was serialized on-line over the course of five months and quickly became an internet cult phenomenon. Two sequels to Monster Island have since also been serialized in the same fashion.
or support indie stores by buying on