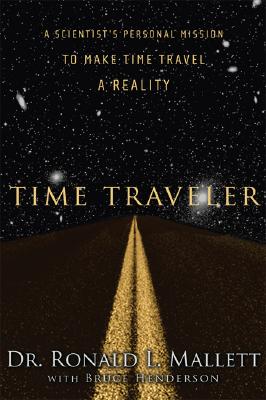 A Scientist's Personal Mission to Make Time Travel a Reality

This is the dramatic and inspirational first-person story of theoretical physicist, Dr. Ronald Mallett, who recently discovered the basic equations for a working time machine that he believes can be used as a transport vehicle to the past. Combining elements of Rocket Boys and Elegant Universe, Time Traveler follows Mallett's discovery of Einstein's work on space-time, his study of Godel's work on a solution of Einstein's equation that might allow for time travel, and his own research in theoretical physics spanning thirty years that culminated in his recent discovery of the effects of circulating laser light and its application to time travel. The foundation for Mallett's historic time-travel work is Einstein's theory of general relativity, a sound platform for any physicist. Through his years of reading and studying Einstein, Mallett became a buff well before he had any notion of the importance of the grand old relativist's theories to his own career. One interesting subtext to the story is Mallett's identification with, and keen interest in, Einstein. Mallett provides easy-to-understand explanations of the famous physicist's seminal work.

Ronald L. Mallett, Ph.D., served in the U.S. Air Force for four years. He received his B.S. in Physics in 1969, M.S. in 1970, and Ph.D. in physics in 1973, all lfrom Pennsylvania State University. In 1975 he joined the faculty at the University of Connecticut, where he is a professor of theoretical physics. He has published many papers on theoretical physics in professional journals. His time travel research has been featured in an hour-long TV special, "The World's First Time Machine," as well as publications as diverse as The Wall Street Journal, Rolling Stone, New Scientist, The Village Voice, The Boston Globe and Pravda.
Loading...
or
Not Currently Available for Direct Purchase