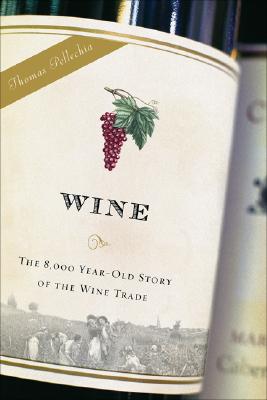 The grape pre-dates humans, so it’s hard to know who discovered wine. However, archeological and other discoveries have made it easier to find this out since wine was used to meet spiritual needs. At least, this is the story that is usually told. But when civilization began about 8,000 years ago it didn't take long for wine to move from an instrument of spirituality to a dominant economic power; all it took was the development of trade. Thereafter, the life and death of certain cultures often depended upon the fortunes of wine trading. Wine may have even sparked the earliest wars.

Presenting its history from a commercial perspective, Wine reveals how the historically powerful wine trade has been a catalyst in many important developments throughout the ages such as sea mercantilism, early glass blowing, cooperage and cork production, trade fairs and festivals, advertising and promotion, the survival of civilization during the so-called Dark Ages, war financing, placating or pacifying troops, tranquilizing marauders, politics, literature and more.

Thomas Pellechia has been in the wine business for twenty years. In 1985, he founded a small boutique winery, Cana Vineyards, in the Finger Lakes region of New York State. His articles on wine have appeared in a variety of publications including Wine Enthusiast, Wines & Vines, Slow Food International, Slow Wine International (Italy), and Decanter (UK). He lives in Upstate New York.
Loading...
or
Not Currently Available for Direct Purchase