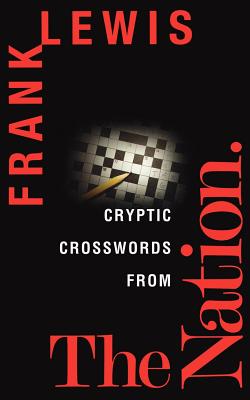 Cryptic Crosswords from The Nation

Though known for its fierce polemics and contrarian political voices, one of the most abiding and popular features of The Nation magazine -- and something Republicans would consider subscribing to the magazine for -- are Frank Lewis' weekly crossword puzzles which have appeared in the magazine since 1947. This new collection of Lewis' work -- the first in over a decade -- will delight Lewis fans and crossword puzzlers alike with his trademark cryptic, punning and anigram-atic style.

Frank W. Lewis has constructed cryptic crosswords as a hobby for the Nation since 1947. Although trained as a musician (with a Master of Music degree) possessing some talent as a conductor, particularly for choral groups, Mr. Lewis worked for thirty years as a cryptanalyst for the War Department and the National Security Agency. Much of his work is still classified. He and his wife retired to the Caribbean in 1969 but had to relocate to Massachusetts after the Montserrat volcano blew. They have five children.
Loading...
or
Not Currently Available for Direct Purchase