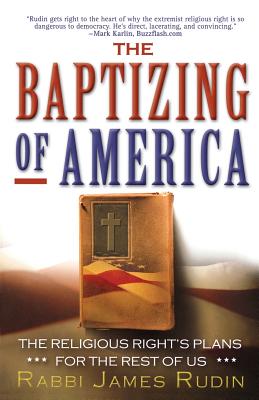 The Baptizing of America

The Religious Right's Plans for the Rest of Us

The Baptizing of America: Politics, Piety, and the Coming Theocracy exposes the systematic campaign by Christian fundamentalists to co-opt and take over every "room" of American society from the bedroom to the school room, hospital room, operating room, courtroom, work room, reading room and newsroom. This book focuses on the aggressive war currently being led by fundamentalist Christians to "baptize America." It is a battle that will determine whether the United States remains a spiritually vital country but without an officially established religion, or whether it will become "Christianized," a "faith-based nation" in which fundamentalist Christianity will be the sole legal dominant religion throughout the land. The war will decide whether America follows the path of many other nations and becomes a theocracy not unlike Iran and the former Taliban regime in Afghanistan.

Over the past thirty-five years, Rabbi James Rubin devoted much of his time to observing and working with the evangelical and fundamentalist Christian groups in the United States. He is currently the American Jewish Committee's Senior Interreligious Advisor and a member of that organization's board of governors.

During his tenure as Director of the AJC's Interreligious Affairs Department, the AJC became the internationally acknowledged leader in Christian-Jewish and Muslim-Jewish relations. In that capacity, Rudin served as the leader of many conferences both in the United States and overseas. He is the past chairman of the International Jewish Committee for Interreligious Consultations, and he has participated in ten meetings with Pope John Paul II. Rabbi Rudin has also participated in historic meetings with the World Council of Churches in Geneva and with Eastern Orthodox Christian leaders in Greece.

He has worked in close consultation with leaders of the well-known Oberammergau Passion Play that is presented every ten years in Germany. It was his leadership efforts that resulted in many positive changes in the portrayal of Jews and Judaism at Oberammergau in 1990 and again in 2000.

Rabbi Rudin was a founder of both the National Interreligious Task Force on Soviet Jewry and the National Interreligious Task Force on Black-Jewish Relations. He currently serves as a member of the New York State Task Force on Life and the Law, an interdisciplinary group that focuses on bioethical legislation and issues. Rabbi Rudin was also a member of the Camp David/Presidential Retreat Interfaith Chapel Committee and the Martin Luther King, Jr. Federal Holiday Commission.

Rabbi Rudin is a prolific writer, providing weekly commentaries for the Religion News Service (RNS)/Newhouse Syndicate since 1991. His articles have appeared in numerous publications and he has lectured throughout the world. He has been a frequent guest on many radio and television programs including NBC, CBS, ABC, Fox, CNN, MSNBC, CNBC, PBS, NPR, BBC, along with German, Japanese, Korean, Polish and Israeli TV networks.

Before joining the AJC in 1968, Rabbi Rudin served congregations in Kansas City, Missouri and Champaign, Illinois. He was also a United States Air Force Chaplain in Japan and Korea. In 1964 he participated in an interreligious, inter racial voting rights drive in Hattiesburg, Mississippi.
Loading...
or support indie stores by buying on