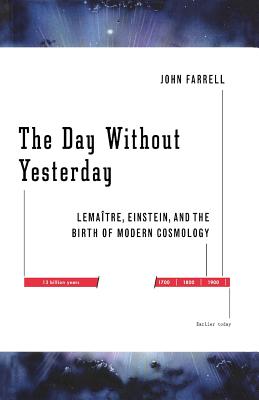 The Day Without Yesterday

Lemaitre, Einstein, and the Birth of Modern Cosmology

Sometimes our understanding of our universe is given a huge boost by one insightful thinker. Such a boost came in the first half of the twentieth century, when an obscure Belgian priest put his mind to deciphering the nature of the cosmos. Is the universe evolving to some unforeseen end, or is it static, as the Greeks believed? The debate has preoccupied thinkers from Heraclitus to the author of the Upanishads, from the Mayans to Einstein. The Day Without Yesterday covers the modern history of an evolving universe, and how Georges LemaÃ®e convinced a generation of thinkers to embrace the notion of cosmic expansion and the theory that this expansion could be traced backward to the cosmic origins, a starting point for space and time that LemaÃ®e called "the day without yesterday." LemaÃ®e's skill with mathematics and the equations of relativity enabled him to think much more broadly about cosmology than anyone else at the time, including Einstein. LemaÃ®e proposed the expanding model of the universe to Einstein, who rejected it. Had Einstein followed LemaÃ®e's thinking, he could have predicted the expansion of the universe more than a decade before it was actually discovered.

John Farrell is a Boston-based writer and producer educated at Harvard in English Literature and History of Science. The former director of media at the Carl J. Shapiro Institute for Education and Research, Beth Israel Deaconess Medical Center, Harvard Medical School, Farrell has written for print and online journals such as Salon, National Review, First Things, and Tech Central. He has published short fiction and poetry and produced a number of independent videos for education and entertainment. He lives north of Boston.
Loading...
or support indie stores by buying on