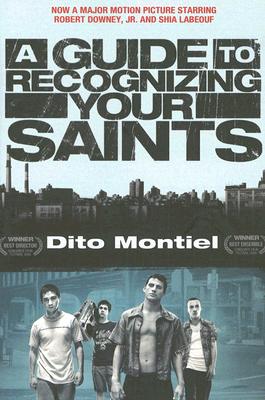 A Guide to Recognizing Your Saints

Orlandito "Dito" Montiel, son of Orlando, a Nicaraguan immigrant, and an Irish mother, grew wild in the streets of Astoria, Queens, pulling pranks for Greek and Italian gangsters and confessing at the church of the Immaculate Conception, gobbling hits of purple mescaline and Old English, sneaking into Times Square whore houses—"Kids from nowhere going nowhere." This is the quintessentially American story of a young man's hunger for experience, his dawning awareness of the bigger world across the bridge, and of the loyalties that bind him to a violent past and to the flawed and desperate saints that have guided him: Dito's father, Antonio "our insane warrior hero," Bob Semen, Frank the dog walker, Jimmy Mullen, Cherry Vanilla, Ginsberg and all the others, the drunks, coke-heads, junkies, the insaniacs like Santos Antonios who said, "Now Dito remember, in life you gotta be crazy."

Dito Montiel wrote A Guide to Recognizing Your Saints, a memoir, and directed its film adaptation. His work and his band, Gutterboy, have been featured in cover stories in such magazines as In Fashion and Details. His articles, interviews, poetry, etc. have appeared in Vanity Fair, Interview, and numerous other magazines.
Loading...
or support indie stores by buying on