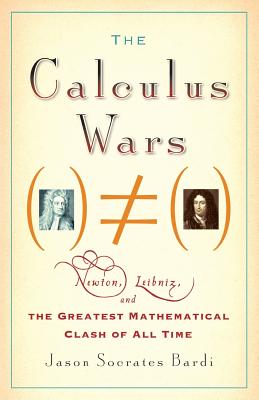 Newton, Leibniz, and the Greatest Mathematical Clash of All Time

Now regarded as the bane of many college students' existence, calculus was one of the most important mathematical innovations of the seventeenth century. But a dispute over its discovery sewed the seeds of discontent between two of the greatest scientific giants of all time -- Sir Isaac Newton and Gottfried Wilhelm Leibniz. Today Newton and Leibniz are generally considered the twin independent inventors of calculus, and they are both credited with giving mathematics its greatest push forward since the time of the Greeks. Had they known each other under different circumstances, they might have been friends. But in their own lifetimes, the joint glory of calculus was not enough for either and each declared war against the other, openly and in secret. This long and bitter dispute has been swept under the carpet by historians -- perhaps because it reveals Newton and Leibniz in their worst light -- but The Calculus Wars tells the full story in narrative form for the first time. This vibrant and gripping scientific potboiler ultimately exposes how these twin mathematical giants were brilliant, proud, at times mad and, in the end, completely human.

Jason Socrates Bardi is a writer and editor specializing in the sciences. He has written for a number of different companies, government agencies, ADN private institutions, including NASA's Goddard Space Flight Center and the Scripps Research Institute.
Loading...
or
Not Currently Available for Direct Purchase