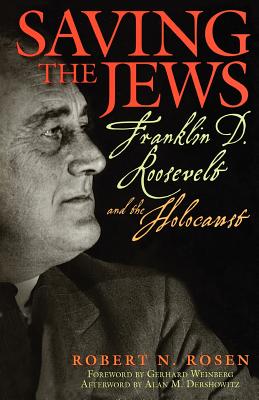 Franklin D. Roosevelt and the Holocaust

Saving the Jews is a rigorously researched narrative and interpretive history of how FDR and his administration dealt with the Nazi persecution of the Jews and the Holocaust, 1933-1945. It disputes the generally accepted view that Roosevelt abandoned the Jews of Europe and that America was a passive, callous bystander to the Holocaust, and reveals the true story. The author has conducted new research that explains how the Roosevelt administration and American Jewry saved the passengers on the S.S. St. Louis; how American Jews (and the Jews of Palestine) opposed the bombing of Auschwitz and never asked Roosevelt to bomb the camps; how America and other western democracies saved over seventy percent of German Jewry from Hitler; how Rauol Wallenberg was sent to save Jews by the American government. The research done on this book has found no credible evidence that FDR was an anti-Semite but found that Roosevelt was personally close to many Jews. FDR secretly developed the strategy for the Wagners-Rogers Bill (allowing 20,000 German Jewish children to enter the U.S. in 1938, 1939). Yet most historians continue to accuse him of failing to support the bill.

Robert N. Rosen is the author of A Short History of Charleston; Confederate Charleston: An Illustrated History of the City adn the People During the Civil War; The Jewish Confederates, and most recently Charleston: A Crossroads of History with Isabella Leland. He is a lawyer in Charleston, South Carolina, and holds an MA in history from Harvard University.
or support indie stores by buying on
Copyright © 2020 American Booksellers Association