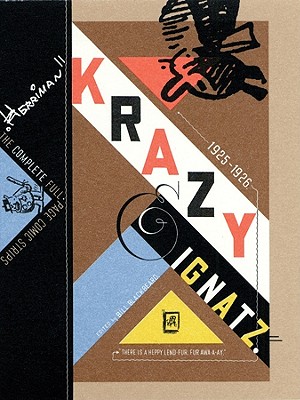 "There Is a Heppy Lend Fur Fur Awa-a-ay"

This volume reprints what many consider to be Herriman's prime: his Sunday strips from 1925 and 1926, two full years of strips printed full-page in their original black and white, plus material never collected before.

Fantagraphics is proud to re-present Krazy Kat to a new generation of readers. Each volume in this series reprints two full years of Sunday strips, or 104 full-page, black-and-white Sunday strips (Herriman did not incorporate color into the strip until 1935). Krazy Kat is a love story, focusing on the relationship of its three main characters. Krazy Kat adored Ignatz Mouse. Ignatz Mouse hated Krazy Kat, the expression of which was in throwing bricks at Krazy's head. Offisa Pup loved Krazy and sought to protect "her" (Herriman always maintained that Krazy was genderless), mostly by throwing Ignatz in jail. Each of the characters was ignorant of the other's true motivations. This simple structure allowed Herriman to build entire worlds of meaning into the actions, building thematic depth that led critics like Gilbert Seldes and E. E. Cummings to recognize Herriman's genius almost immediately. Each of Fantagraphics' Krazy & Ignatz volumes is designed by Chris Ware, creator of the wildly successful ACME Novelty Library series. This beautiful volume includes material never collected before.

George Herriman (1880-1944), the creator of Krazy Kat, was born in New Orleans and lived most of his life in Los Angeles, California. He is considered by many to be the greatest strip cartoonist of all time.

Bill Blackbeard, the founder-director of the San Francisco Cartoon Art Museum, is the world's foremost authority on early 20th Century American comic strips. As a freelance writer, Blackbeard wrote, edited or contributed to more than 200 books on cartoons and comic strips, including The Smithsonian Collection of Newspaper Comics, 100 Years of Comic Strips, and the Krazy & Ignatz series.
or
Not Currently Available for Direct Purchase
Copyright © 2020 American Booksellers Association