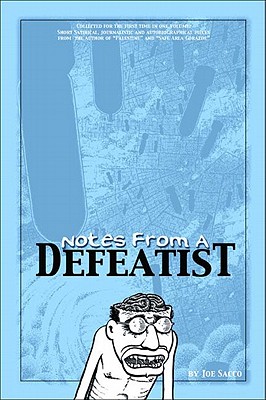 Notes From a Defeatist

Before Joe Sacco crafted his two major works of "cartoon journalism," Palestine and Safe Area Gorazde, he created a number of shorter pieces, ranging from one-page gags to 30-page "graphic novelettes." This massive book finally collects the entirety of Sacco's earlier journalistic and autobiographical work, plus a sizable serving of his satirical strips, many of them never before collected in book form.

The centerpieces in Notes from a Defeatist are a triptych of war stories: "When Good Bombs Happen to Bad People," a history of aerial bombing that specifically targets civilian populations; "More Women, More Children, More Quickly," in which Sacco relates his mother's harrowing experiences during World War II in Malta; and, most personally (and closest to Sacco's later work), "How I Loved the War," Sacco's impassioned but sardonic reflection on the Gulf War, the surrounding propaganda and media circus, and his own ambivalent feelings as both a spectator and commentator: The book derives its title from this sequence, which has acquired a painful new relevance in the past half-year. Notes from a Defeatist also includes a roadie's-eye view of an American punk band's eventful European tour, a reminiscence of an awful season spent in his native Malta, and much more. Notes from a Defeatist is a fantastic primer to Sacco's work.

Joe Sacco lives in Portland, Oregon. He is the author of many acclaimed graphic novels, including Palestine, Safe Area Gorazde, But I Like It, Notes from a Defeatist, The Fixer, War's End, and Footnotes in Gaza.
Loading...
or support indie stores by buying on
(This book is on backorder)