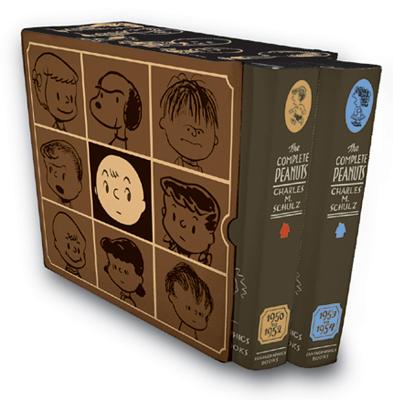 Collecting the first and second volumes of The Complete Peanuts (1950-1952 and 1953-1954) in one handsome collector's slipcase designed by the cartoonist Seth, this is the perfect gift book item.

In The Complete Peanuts 1950-1952: This first volume, covering the first two and a quarter years of the strip, will be of particular fascination to Peanuts aficionados worldwide: Although there have been literally hundreds of Peanuts books published, many of the strips from the series' first two or three years have never been collected before—in large part because they showed a young Schulz working out the kinks in his new strip and include some characterizations and designs that are quite different from the cast we're all familiar with. (Among other things, three major cast members—Schroeder, Lucy, and Linus—initially show up as infants and only "grow" into their final "mature" selves as the months go by. Even Snoopy debuts as a puppy!) Thus The Complete Peanuts offers a unique chance to see a master of the art form refine his skills and solidify his universe, day by day, week by week, month by month. This volume is rounded out with Garrison Keillor's introduction, a biographical essay by David Michaelis (Schulz and Peanuts) and an in-depth interview with Schulz conducted in 1987 by Gary Groth and Rick Marschall, all wrapped in a gorgeous design by award-winning cartoonist Seth.

In The Complete Peanuts 1953-1954: Our second volume is packed with intriguing developments, as Schulz continues to create his tender and comic universe. It begins with Peanuts' third full year and a cast of eight: Charlie Brown, Shermy, Patty, Violet, Schroeder, Lucy, the recently-born Linus, and Snoopy. By the end of 1954, Pigpen and his dust cloud join the crowd. Linus, who still doesn't speak, begins to emerge as one of the most complex and endearing characters in the strip: garrulous and inquisitive yet gentle and tolerant. And, in this volume, he acquires his security blanket! Charlie Brown is becoming his best-known self, the lovable, perpetually-humiliated round-headed loser, but he hasn't yet abandoned his brasher, prankish behavior from Volume 1. And, Lucy, this book's cover girl, has grown up and forcefully elbowed her way to the center of the action, proudly wearing her banner as a troublemaker, or, in Schulz's memorable phrase, a "fussbudget". For readers unfamiliar with the early years of the strip, Snoopy's appearances here may come as the biggest surprise: he behaves, for the most part, like a dog! But, although he doesn't yet walk upright, sleep on top of his doghouse, or possess a fantasy life, Snoopy has started thinking for himself and his evolution continues its fascinating course within these pages. If you watch carefully, you'll catch his very first shark impression. The vast majority of the daily and Sunday strips collected here are not currently available in any in-print Peanuts collection. Dozens of them have not been reprinted since their initial appearance in newspapers over 50 years ago. Introduction by Walter Cronkite.