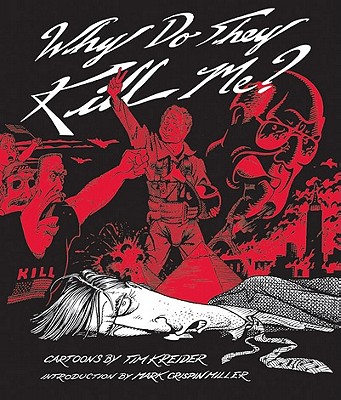 Why Do They Kill Me?

For years Tim Kreider's cartoons, as collected in 2004's The Pain: When Will It End?, were single-panel non sequiturs in the tradition of B. Kliban, about the squalor and ridiculousness of the human condition. But after the takeover by the Bush-Cheney regime and the War on Terror, he focused his bitter humor on more timely issues. His political cartoons have been, in the words of Ted Rall (not known as a sentimental softie), "among the most viscerally anti-Bush work around." As reality has become ever more nightmarish, Kreider's been driven to push the outer limits of humor to parody it. In this collection you will find:


Cynical, astute, blackly hilarious, and deeply biased, these cartoons are neither the superficial, obvious jibes that appear in your daily paper's editorial section nor the didactic left-wing rants syndicated in your local alternative weekly; they are the artistic equivalent of hollow-point bullets fired from a high-powered rifle with a laser sight directly into the brain of the Bush administration.


Praise For Why Do They Kill Me?…

Anyone who considers himself a lover of great satire will adore this.
— The Comic Book Bin

Tim Kreider's was born and educated in Baltimore, MD and lives in an undisclosed location on the Chesapeake Bay. His articles have appeared in Film Quarterly and The Comics Journal. His cartoons appear every week in the Baltimore City Paper and the Jackson Planet Weekly. Kreider's books include Twilight of the Assholes, Why Do They Kill Me?, and The Pain—When Will It End?
Loading...
or
Not Currently Available for Direct Purchase