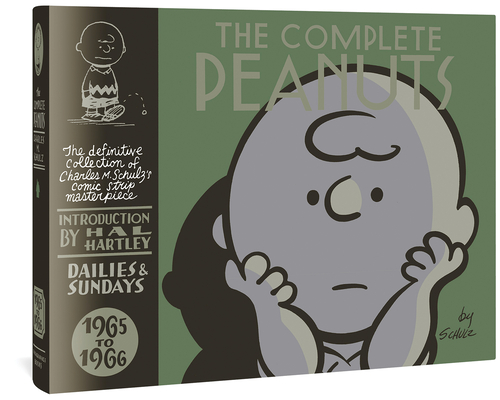 The mid-1960s was one of Schulz's peak periods of creativity. Snoopy has his first "dogfight" with the Red Baron, Charlie Brown and Linus go to summer camp, and Peppermint Patty makes her debut.

We are now in the mid-1960s, one of Schulz's peak periods of creativity (and one third of the way through the strip's life!). Snoopy has become the strip's dominant personality, and this volume marks two milestones for the character: the first of many "dogfights" with the nefarious Red Baron, and the launch of his writing career ("It was a dark and stormy night..."). Two new characters—the first two from outside the strip's regular little neighborhood—make their bows. Roy (who befriends Charlie Brown and then Linus at summer camp) won't have a lasting impact, but upon his return from camp he regales a friend of his with tales of the strange kids he met, and she has to go check them out for herself. Her name? "Peppermint" Patty. With an introduction by filmmaker Hal Hartley.

Charles M. Schulz was born November 25, 1922, in Minneapolis. His destiny was foreshadowed when an uncle gave him, at the age of two days, the nickname Sparky (after the racehorse Spark Plug in the newspaper strip Barney Google). His ambition from a young age was to be a cartoonist and his first success was selling 17 cartoons to the Saturday Evening Post between 1948 and 1950. He also sold a weekly comic feature called Li'l Folks to the local St. Paul Pioneer Press. After writing and drawing the feature for two years, Schulz asked for a better location in the paper or for daily exposure, as well as a raise. When he was turned down on all three counts, he quit.

He started submitting strips to the newspaper syndicates and in the spring of 1950, United Feature Syndicate expressed interest in Li'l Folks. They bought the strip, renaming it Peanuts, a title Schulz always loathed. The first Peanuts daily appeared October 2, 1950; the first Sunday, January 6, 1952. Diagnosed with cancer, Schulz retired from Peanuts at the end of 1999. He died on February 13, 2000, the day before Valentine's Day-and the day before his last strip was published, having completed 17,897 daily and Sunday strips, each and every one fully written, drawn, and lettered entirely by his own hand — an unmatched achievement in comics.

The multi-talented, Hal Hartley is a key figure in the American indpendent film movement. His credits include Henry Fool, The Book of Life, and No Such Thing.
Loading...
or support indie stores by buying on