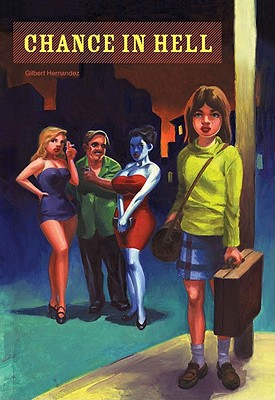 A three-act story following the life of a young girl adopted out of a hellish slum by a decent man. She eventually marries a kind, well-to-do man, but finds that she can't escape the darkness and violence she left behind.

Gilbert Hernandez's first original graphic novel from Fantagraphics follows on the heels of his acclaimed graphic novel, Sloth, from DC's Vertigo Comics in 2006. Chance in Hell tells the story about a little orphan girl who lives in the slum of slums. Nobody knows who she is or where she's from, but her fellow shantytown inhabitants collectively look over her. The three-act story follows our heroine as she is adopted by a decent man who raises her well, and she eventually marries a kind, well-to-do man, only to discover that she can't relate to the good life and the comforts it provides. This is the first in a series of standalone stories depicting the fictional filmography of Gilbert's Love and Rockets character, the B-movie actress Fritz. Hernandez wowed critics in 2003 with his epic work, Palomar, collecting more than 20 years of groundbreaking comics called "the most substantive single work that the comics medium has yet produced," by Booklist. Chance in Hell further establishes Hernandez as one of the great cartoonists of our age.


Praise For Chance in Hell…

Chance in Hell is a visually stunning book that challenges its readers with a story that does not fit neatly into any genre. A book that forces readers to think and ask questions, this is a disturbingly tragic story that is still able to engage its readers. It is a book that dares to walk over the edge of what is expected, and with an able guide such as Gilbert Hernandez, one can be sure of landing softly as the ground swiftly approaches.

Gilbert Hernandez lives in Las Vegas, NV, with his wife and daughter. He is co-creator of the long-running, award-winning, and critically acclaimed series Love and Rockets.
or support indie stores by buying on
(This book is on backorder)