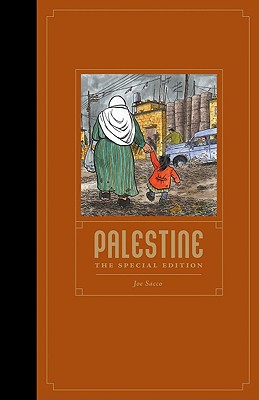 The landmark of comics journalism in an expanded and re-designed edition that includes a host of unseen supplemental material, including background notes, sketches, reference photos, a new interview with Sacco, and much more.

Fantagraphics Books is pleased to present, for the first time, the definitive, expanded, hardcover collection of Sacco's landmark of comics journalism. Palestine: The Special Edition is more than a new edition: consider it the "Criterion" Palestine. In addition to the original, 288-page graphic novel and introduction by the late Edward Said, The Special Edition includes a host of unique material never before published, including many of Sacco's original background notes, sketches, photographic reference, and much more. The book also includes a new, introductory interview with Sacco about the making of the book as well as a new cover and design. Palestine: The Special Edition will be a cornerstone of any serious comic collection. With the Middle East's role in contemporary world politics, Sacco's Palestine has never been more relevant or more valuable to a country desperate to understand this long-running conflict. Based on several months of research and an extended visit to the West Bank and Gaza Strip in the early 1990s (where he conducted over 100 interviews with Palestinians and Jews), Palestine was the first major comics work of political and historical nonfiction by Sacco, whose name has since become synonymous with this graphic form of New Journalism. Sacco's insightful reportage takes place at the front lines, where busy marketplaces are spoiled by shootings and tear gas, soldiers beat civilians with reckless abandon, and roadblocks go up before reporters can leave. Sacco interviewed and encountered prisoners, refugees, protesters, wounded children, farmers who had lost their land, and families who had been torn apart by the Palestinian conflict.


Praise For Palestine: The Special Edition…

He's not just one of the best cartoonists, but also one of the best journalists. This is a great book to give to someone who maybe doesn't really know what comics are capable of.
— Brian K. Vaughan - Comic Foundry

Joe Sacco lives in Portland, Oregon. He is the author of many acclaimed graphic novels, including Palestine, Safe Area Gorazde, But I Like It, Notes from a Defeatist, The Fixer, War's End, and Footnotes in Gaza.
Loading...
or
Not Currently Available for Direct Purchase