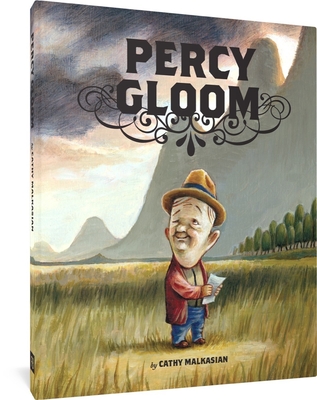 2008 Eisner Award winner for Most Promising Newcomer: an absurd but hopeful cartoon fable for these strange times we live in.

Cathy Malkasian has made the jump from animation to the printed page with a graceful, delicate leap. She deftly uses her pencil to create thick, expressive characters moving through the twilight of a shadowy Orwellian world. Humorous and bewitching at the same time, Percy Gloom is a unique gem of a story. The story begins with our hero bravely striking out on his own for the first time, leaving his mother's house to apply for his dream job as a cautionary writer for the Safely-Now Corporation. In the process, he uncovers an unreal world of secret societies, benevolent families, and bureaucratic security. Lazy-eyed Percy Gloom fights to overcome the loss of his wife, Lila, to a truth-pointing, lotharian cult leader. Approached by his doctor to help protect some special people and given advice by some talking goats, Percy comes to terms with his place in the gloomy world and finds himself reaching enlightenment (literally). Percy Gloom is an absurd but hopeful fable for these strange times we live in.

A stunning debut, filled with striking, smart ruminations on the
brevity of life and happiness and the sweetness of both.
— Harrisburg Patriot-News

This reads like a Kafka tale, had Kafka also been a cartoonist who
trained under Edward Gorey, Richard Sala and Dave Cooper.
— Chris Reilly - Bookslut

Cathy Malkasian is an animation director and cartoonist. Her credits include Rugrats, The Wild Thornberrys film (for which she received a British Academy Award nomination), and most recently, over 20 episodes of Curious George for PBS since 2008.
Loading...
or
Not Currently Available for Direct Purchase