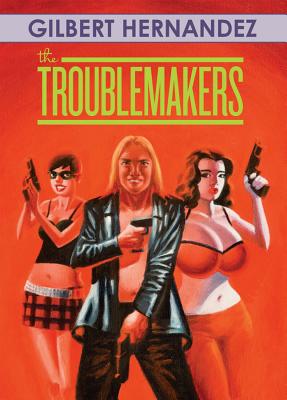 A drug dealer, a rock 'n' roll loser, an uber-stacked vixen, and a wily grifter: these greedy low-lifes are chasing the hard luck charm! Beto's follow-up to Chance in Hell is a lurid, hard-boiled, pulpy delight!

Dig this scene! Low-life drug dealer Dewey Booth has $200,000 that even-lower-lifes want. BLING! Wes is a rock and roll loser that only wants to buy a club where nobody can tell him he can't sing or perform. WAILIN'! He's known Dewey for years, but that isn't enough to get his dough. Wes needs help. Nala is an uber-stacked bombshell whose pleasure in life is to seduce and then humiliate men dumb enough to fall for her. HUSH HUSH! For half the dough, she agrees to help Wes get Dewey's ill-gotten goods. Things don't go so well when a wily grifter from Wes's past shows up to complicate things. GULP! Vincene is another troublemaker who enjoys wrecking people's plans and wants the Dewey dough, too. In the end, deadly fires ignite, heads literally roll, eyes are shot out — and all Wes wants to do is sing in a rock and roll club.

The Troublemakers is the second volume in a series of original graphic novels in which Gilbert Hernandez creates comics adaptations of movies starring or co-starring Luba's half-sister Rosalba "Fritz" Martinez from Love and Rockets. The first, the dystopian Chance in Hell (in which Fritz has only a bit part), was released in 2007. This hard boiled, pulp graphic novel will delight longtime Hernandez fans as well as provide a perfect introduction to newcomers to Hernandez's work.

Gilbert Hernandez lives in Las Vegas, NV, with his wife and daughter. He is co-creator of the long-running, award-winning, and critically acclaimed series Love and Rockets.

Praise For The Troublemakers…

Each [panel] almost vibrates with the frenetic, desperate energy of the characters... That energy explodes in the final pages, as the story comes to a dramatic but ambiguous conclusion. In the end, the work offers an homage to B-movies while standing out as a graphic novel.

The outlandish plot piles double-crosses upon double-crosses, leading up to an over-the-top, apocalyptic denouement. It’s pulpy fun that, appropriately, has the dashed-off, anything-goes spirit of a straight-to-video caper flick.
— Gordon Flagg

[A] sweet little book in which a bunch of grifters try to trick each other out of money. It seems to be about love and trust and whether anybody is dependable or if they’re all trying to survive. It’s pretty great.
— Nick Gazin

Hernandez has totally captured the look and feel of a B-movie with this one… only it’s a whole lot prettier because the guy is a hell of an artist. ... One can imagine a young Quentin Tarantino taking in a Saturday afternoon viewing of The Troublemakers and being quite inspired.

[I]n these pages lies a challenging, meticulously crafted story of grifters in the middle of a con. Not surprisingly, [Gilbert] Hernandez populates his story with some thoroughly grounded and intriguing figures, but what’s fascinating about the plot is how it criss-crossed over on itself so that not only do the characters remain unaware of who’s conning who but so does the reader. The plot is an intricately woven web of lies and truths, and it’s peppered, of course, with Hernandez’s trademark touch of raw sexuality. Fans of such crime comics as Criminal and 100 Bullets would be well advised to give this graphic novel a chance; they won’t be disappointed. ... [Rating] 9/10.

I zipped through this fun read, filled with backstabbing, double-crosses, and the spectacular art of Gilbert Hernandez. There is enough sex, violence, and treachery for any fan of pulp fiction. ... This offshoot of the Love and Rockets series is too much fun to miss.

[A] love letter to 70s exploitation movies... The Troublemakers... shows the artist at the height of his powers, capable of crafting characters with surprising depth even in the basest of genre stories.

[The] Troublemakers… features amazing cartooning. …[T]he storytelling relies on Hernandez’s masterful use of staging and talent with composition. His ability to spot blacks, place textures, and overall cartooning/drawing skills made this crime story a delight to read.

In Hernandez’s hands, [The Troublemakers] unspools on the page like a Russ Meyer production, from the in-your-face nudity, right down to the cartoony violence played for laughs. ...[I]t sure is fun.

It’s an exquisite story. With the characters locked in a tussle of greed and deceit, Hernandez makes his writing craft look effortless. The script is low-key and natural, the characters three-dimensional and interesting.

[A] noirish tale of crosses double and triple, in which the same small cast keeps tripping over each other, making and breaking promises and plans and alliances. ... the plot is suitably twisty and energetic.
— Andrew Wheeler