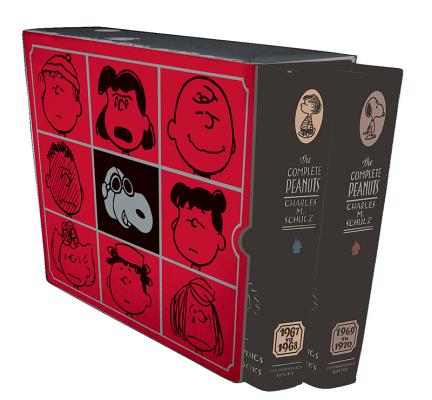 Collecting the ninth and tenth volumes of The Complete Peanuts (1967-1968 and 1969-1970) in one handsome collector's slipcase designed by the cartoonist Seth, this is the perfect gift book item.

In The Complete Peanuts 1967-1968: As we rush toward the end of Peanuts' second full decade, Snoopy finds himself almost completely engrossed in his persona as the World War I Flying Ace — to the point where he goes to camp with Charlie Brown and maintains his persona throughout the entire two-week period (much to Peppermint Patty's bafflement). Still, Snoopy looms large, so this volume (a particularly Snoopy-heavy one) sees him arm-wrestling Lucy as the "Masked Marvel" and then taking off for Petaluma for the national arm-wrestling championship; impersonating a vulture and a "Cheshire Beagle"; enjoying golf and hockey; attempting a jaunt to France for an ice-skating championship; running for office on the "Paw" ticket; being traded to Peppermint Patty's baseball team, then un-traded and installed as team manager by a guilt-ridden Charlie Brown; as well as dealing with the return of his original owner, Lila. If you're surprised by that last one, imagine how Charlie Brown feels... Lila makes only a brief appearance (as does José Peterson, a short-lived — and short — star member of Charlie Brown's baseball team), but this volume sees the appearance of what would be Schulz's most controversial major character: Franklin. (Yes, in 1968 the introduction of a Black character caused a stir.) Peppermint Patty, working toward her ascendancy as one of the major Peanuts players in the 1970s and 1980s, also has several major turns, including a storyline in which she’s the tent monitor for three little girls (who call her "Sir" — a joke Schulz would pick up later with Peppermint Patty's friend Marcie). Stories involving other characters include a sequence in which Linus's flippant comment to his Gramma that he'll kick his blanket habit when she kicks her smoking habit backfires; Lucy bullies Linus, pesters Schroeder, and organizes a "crab-in"; plus Charlie Brown copes with Valentine's Day depression, the Little Red-Haired Girl, the increasingly malevolent kite-eating tree, and baseball losses. In other words: Vintage Peanuts! All this, plus an introduction by beloved transgressive filmmaker John Waters and award-winning design by Seth.

In The Complete Peanuts 1969-1970: He turns up first as Snoopy’s secretary, then gradually becomes a good friend whom Snoopy helps to fly South... but it’s not until June 22, 1970 that the little bird gains a name, in a perfect salute to the decade that ends with this volume: Woodstock! In other timely stories, Peppermint Patty runs afoul of her school’s dress code (those sandals!), Lucy declares herself a “New Feminist,” and Snoopy’s return to the Daisy Hill Puppy Farm on a speaking engagement climaxes in a riot and a new love found amidst the teargas (“She had the softest paws...”). Speaking of Snoopy, this volume falls under the sign of the Great Beagle, as three separate storylines focus on the mysterious sovereign of Beagledom. First Snoopy is summoned by a wrathful G.B. when Frieda submits a complaint about his (Snoopy’s) desultory rabbit-chasing efforts; then, back in the Great one’s good graces, Snoopy is sent on a secret mission; and finally he himself ascends (briefly!) to the mantle of Great Beagledom. In other news, an exasperated Lucy throws Schroeder’s piano into the maw of the kite-eating tree, with gruesome results... Miss Othmar goes on strike and Linus gets involved... Charlie Brown’s baseball team has an actual (brief) winning streak... Snoopy’s quest to compete in the Oakland ice skating competition is thwarted by his inability to find a partner... Charlie Brown goes to a banquet to meet his hapless baseball hero Joe Shlabotnik... Snoopy is left in the Van Pelt family’s care as Charlie and Sally Brown head out of town for a vacation... and (alas) the Little Red-Haired Girl moves away... This volume also features a new introduction by renowned illustrator Mo Willems and, as always, gorgeous design by award-winning cartoonist Seth.

Director, screenwriter, and well-known raconteur of American kitsch and camp, John Waters' films include Pink Flamingos and Cecil B. Demented. In 2002 his film Hairspray was made into a hit Broadway musical.

Mo Willems is an award-winning animator, illustrator, and author. His many books include the acclaimed children's books Knuffle Bunny and The Pigeon and Elephant and Piggie series.