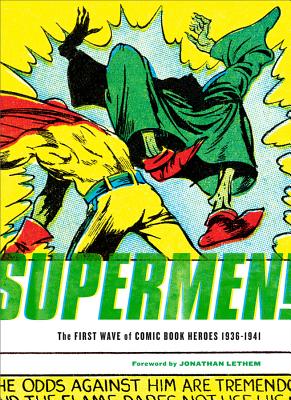 "A collection like SUPERMEN! works like a reverse-neutron bomb to assumptions about the birth of the superhero image: it tears down the orderly structures of theory and history and leaves the figures standing in full view, staring back at us in all their defiant disorienting particularity, their blazing strangeness."—from the foreword by Jonathan Lethem

The enduring cultural phenomenon of comic book heroes was invented in the late 1930s by a hungry and talented group of artists and writers barely out of their teens, flying by the seat of their pants to come up with something new, exciting, and above all profitable. The iconography and mythology they created flourishes to this day in practically all visual media. Supermen! collects the best and the brightest of this first generation, including Jack Cole, Will Eisner, Bill Everett, Lou Fine, Fletcher Hanks, Jack Kirby, Jerry Siegel, Joe Shuster, and Basil Wolverton. Readers expecting to find an All-American group of altruistic do-gooders are in for quite a jolt. As Jonathan Lethem writes in his Foreword, “A collection like Supermen! works like a reverse-neutron bomb to assumptions about the birth of the superhero image: it tears down the orderly structures of theory and history and leaves the figures standing in full view, staring back at us in all their defiant disorienting particularity, their blazing strangeness.” Beautifully designed and produced in full color, Supermen! contains twenty full-length stories, nine full-sized covers, a generous selection of vintage promotional ads, and comprehensive background notes by editor Greg Sadowski.

This anthology is indispensable to anyone interested in the origins of superheroes and the history of the comic book form.

Jonathan Lethem is the author of six novels, including the bestsellers The Fortress of Solitude and Motherless Brooklyn, which won the National Book Critics Circle Award. He lives in Brooklyn and Maine.

What was once mundane had become utterly fascinating in Fantagraphics’ superb collection Supermen!

A beautifully designed volume of early American comics... The edition is both aesthetically pleasing and sturdy, featuring clarified reprinting of the colour strips, covers, and scattered elements of advertisements and back matter.
— Michael Leader


The biggest surprise might be how good these stories are, even if they failed to take off in the way that, say, Superman did... [T]he Notes section at the end, written by editor Greg Sadowski, ...is truly fantastic... His studious efforts are worth the price of the book alone... These stories deserved another look and more attention. Sadowski has done an admirable job of making Supermen! The First Wave of Comic Book Heroes 1936–1941 not only reverent, but exciting and fun as well.

A fun anthology that perfectly captures the experience of stumbling across a random stack of old comics in someone’s attic.

Supermen! is a rambunctious anthology of the earliest superhero stories—gaudy, crude, infernally potent things, cranked out by young cartoonists.

Supermen! provides a concise glimpse into what the early comic books were like back when the medium was really fresh... Today’s readers will be surprised at how some of the material from a supposed more naive times really comes across rather grim and gritty... The 20 stories on view here provide an intriguing insight of where many of our modern day comic book heroes may have originated from, even if indirectly.

Excitingly surreal…our appreciation for the bizarre otherness of these characters in retrospect suggests that our contemporary icons might well appear no less ‘totally opaque and infinitely awkward’ to future readers.

Supermen! excited me... for suggesting a burning, manic soul of superhero comics... It felt like the start of a future, and the comedown only hit when I realized I enjoyed it more than any new superhero comic of 2009.

I can’t think of a better single volume of what the period style of fast looked like in practice than last year’s Supermen! anthology. Yes, there’s an added winnowing by genre but that just sharpens the sense of the reductive visual and narrative requirements that were standard for the hot new gravy train that hit the business.

A marvel... a non-stop visual delight as much for the art as for the colors as for the audacious (sometimes by default) layouts… [T]he early days of comic books were like the underground: Everything was possible, especially the impossible. You absolutely must buy this book.
— Jean-Pierre Dionnet, co-founder, Les Humanoïdes Associes