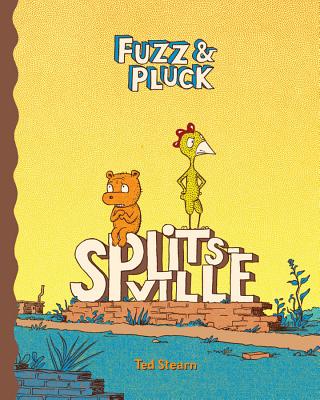 Fuzz & Pluck: Splitsville tells the hilariously bizarre adventures of Pluck, an irritable and featherless rooster, and his best pal, the awkwardly unsocialized but lovable teddy bear known as Fuzz. These two usually inseparable and co-dependent misfits find themselves suddenly separated and alone. Pluck vows to establish his place in the world's pecking order by becoming a champion gladiator, while the more demure Fuzz finds himself a POW in a stuffed animal collection, only to escape and befriend a mercurial ferryman who recruits him for an impossible task. These absurdities pile on and eventually converge in a fatal collision course that reunites our heroes.

Fuzz & Pluck is an odd, and unusually original graphic novel, a "funny animal" comic that is surprisingly human. Rich with pathos, wit, farce, existentialism and drama, often cruel, always funny, this superficially ridiculous struggle for survival is an Alice in Wonderland for grown-ups that reaches absurdly delightful heights. As Simpsons creator Matt Groening says, "This epic tale of a hapless li'l bear and his defeathered friend is why I love comics. All hail the peculiar Fuzz & Pluck and their creator, Ted Stearn!"

Ted Stearn is longtime storyboard artist for animation. Fuzz & Pluck is the author's most personal work, showcasing his vivid imagination and meticulous draughtsmanship.

Ted Stearn, born in Massachusetts, is an L.A.-based cartoonist and animator. A graduate of the Rhode Island School of Design and the School of Visual Arts, he segued into a career in animation, working on such series as Futurama, King of the Hill, and Beavis and Butthead. He has also taught at the Savannah College of Art and Design. In 2014, he won Best Series at the international Angouleme comics festival.

Ted Stern has all of cartooning’s best graces…He’s a poet, a dreamer, an artist.
— Arthur Smid
or
Not Currently Available for Direct Purchase
Copyright © 2020 American Booksellers Association