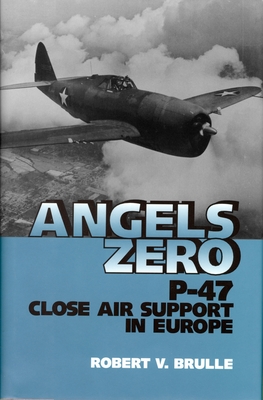 Robert V. Brulle, who flew seventy ground support missions with the 366th Fighter Group, links his daily experiences in the cockpit not only with the battles in which he participated but also with events in the wider European theater. Combining anecdotes from his personal diary, research in US and German records, and interviews with participants from both sides, Brulle details a combat career that began just after D-Day, when he flew column cover for Allied troops as they chased the German military out of France. He then describes the brutal, six-week Hürtgen Forest campaign, during which his fighter group lost 15 pilots and 18 aircraft. He also tells how the otherwise bitterly fought Battle of the Bulge provided the 366th with an opportunity to successfully engage 60 Luftwaffe airplanes in a dogfight directly over their airfield.

Angels Zero combines both personal and historical detail to vividly re-create a lesser-known aspect of the air war in Europe.

Robert V. Brulle's service in Word War II began a fifty-five-year career in aviation. In 1957 he joined McDonnell Aircraft as an aerodynamicist and also became an adjunct associate professor of mechanical engineering at the University of Missouri Graduate Engineering Center. Since his retirement in 1988, he has published twelve articles on aviation and history.
Loading...
or
Not Currently Available for Direct Purchase