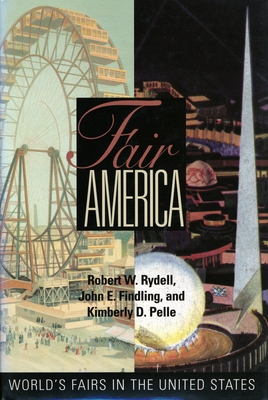 World's Fairs in the United States

Since their inception with New York's Crystal Palace Exhibition in the mid-nineteenth century, world's fairs have introduced Americans to “exotic” pleasures such as belly dancing and the Ferris Wheel; pathbreaking technologies such as telephones and X rays; and futuristic architectural, landscaping, and transportation schemes. Billed by their promoters as “encyclopedias of civilization,” the expositions impressed tens of millions of fairgoers with model environments and utopian visions.

Setting more than 30 world’s fairs from 1853 to 1984 in their historical context, the authors show that the expositions reflected and influenced not only the ideals but also the cultural tensions of their times. As mainstays rather than mere ornaments of American life, world’s fairs created national support for such issues as the social reunification of North and South after the Civil War, U.S. imperial expansion at the turn of the 20th-century, consumer optimism during the Great Depression, and the essential unity of humankind in a nuclear age.

Praise For Fair America: World's Fairs in the United States…

“Filled with archival photographs and boasting a section of extensive notes, Fair America examines and documents 30 world's fairs from 1853 to 1984. It would seem to be the definitive work, exploring the intentions of organizers, the perceptions of audiences, and the way minorities challenged stereotypes at each fair. Any school, public, or academic library would welcome this systematic work.”—Library Journal

Robert W. Rydell is a professor of history at Montana State University—and the author of All the World's a Fair (1984) and World of Fairs (1983).

John E. Findling is a professor of history at Indiana University Southeast and the author of Chicago's Great World's Fairs (1994).

Kimberly D. Pelle is an admissions counselor at Indiana University Southeast and coeditor, with John E. Findling, of Historical Dictionary of World's Fairs and Expositions (1990).
Loading...
or
Not Currently Available for Direct Purchase