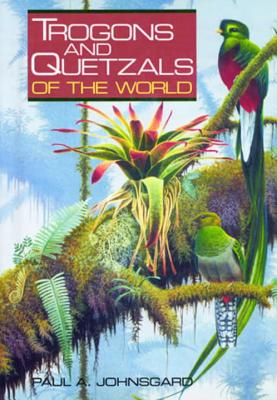 Trogons and Quetzals of the World

Of all birdgroups, none is more closely associated with the world's tropical forests than trogons and quetzals. With shimmering golden-green feathers and long ornamental tail coverts, Central America's resplendent quetzal often has been called the world's most beautiful bird. Other New World as well as African trogonids also are iridescent and brightly pigmented, while red or reddish brown hues predominate in Asian species. Since deforestation and fires have ravaged many of the reclusive group's prime habitats, ornithologists and conservationists may soon be unable to study many of the world's trogonids in their native environments. Beautifully illustrated with color plates and line drawings, this comprehensive review of trogons and quetzals -- the first to be published in more than 150 years -- covers all thirty-nine extant species. The book includes detailed species accounts, range maps, and identification keys as well as a chapter that discusses comparative biology in terms of evolution, anatomy and morphology, behavior, ecology, breeding biology, and populations. Forty hand-colored plates -- most by the renowned nineteenth-century illustrator John Gould -- depict adults of both sexes; nineteen line drawings by author Paul Johnsgard illustrate behavior and anatomy. The book also includes more than three hundred bibliographic references. Despite their beauty and renown among birders, little has been previously published about the biology of many trogon and quetzal species. This up-to-date survey will serve as a valuable reference for ornithologists, conservationists, aviculturalists, and birdwatchers worldwide.

Paul A. Johnsgard has published more than forty books, including Trogons and Quetzals of the World (2000). He recently retired from the University of Nebraska and lives in Lincoln.
Loading...
or
Not Currently Available for Direct Purchase