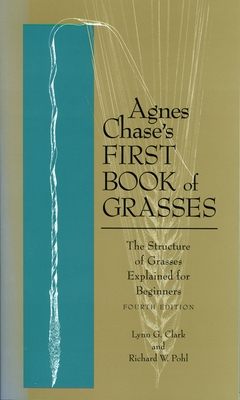 The Structure of Grasses Explained for Beginners, Fourth Edition

For almost seventy-five years, Agnes Chase's First Book of Grasses has been the classic guide to the structure of this complex group of plants. Clearly written and copiously illustrated with line drawings, the book is accessible to those with little or no botanical training, yet it also is respected by botanists as an authoritative introduction to agrostology.

Last updated in 1959, the book now has been thoroughly revised to reflect current scientific knowledge, nomenclature, and classification. Divided into twelve lessons, the guide first surveys the basic vegetative and reproductive parts of a grass plant, then in succeeding lessons takes up increasingly more complex modifications. Formally recognized groups of grasses are discussed in a taxonomic context, with the principal focus on grass structures, particularly those of inflorescences and spikelets. Virtually all of the species discussed are illustrated with detailed line drawings. With the addition in this edition of a lesson on bamboos, coverage now extends to tropical regions and encompasses all major groups of grasses. The book also includes a short biography of Agnes Chase in the foreword and, for the first time in this edition, a glossary accompanies the appendices on grass classification.

“An affordable and valuable addition to any horticulturist's bookshelf. . . . [This book makes] the seemingly insurmountable complexity of the grass inflorescence accessible to horticulture students and botanists alike. . . . Many of the illustrations are from the first edition, and are exquisite in their detail and clarity.”—HortScience

“Beautifully illustrated and a handy companion to a botanical garden.”—New Scientist

“A new edition of the classic botanical introduction to agrostology covering the major groups of grasses found in the Americas. Truly a standard, Chase first published the guide in 1902 and was considered the preeminent agrostologist of American grasses at the time of her death in 1963.”—SciTech Book News