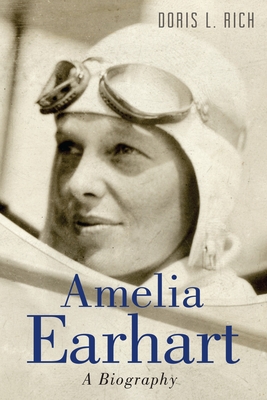 She died mysteriously before she was forty. Yet in the last decade of her life Amelia Earhart soared from obscurity to fame as the best-known female aviator in the world. She set record after record—among them, the first trans-Atlantic solo flight by a woman, a flight that launched Earhart on a double career as a fighter for women's rights and a tireless crusader for commercial air travel. Doris L. Rich's exhaustively researched biography downplays the “What Happened to Amelia Earhart?” myth by disclosing who Amelia Earhart really was: a woman of three centuries, born in the nineteenth, pioneering in the twentieth, and advocating ideals and dreams relevant to the twenty-first.

Praise For Amelia Earhart: A Biography…

“Earhart emerges as a complex, controversial, and fascinating flesh-and-blood woman of many facets. . . .Well-researched and intelligently written.”—Chicago Tribune

“Defines Amelia Earhart by her courage, generosity, and determination, and not by the way her life ended.”—American Heritage

"Rich's portrait reveals a determined, independent woman, brave enough 'to go where no one had gone and to do what no one had done' ... [and] illuminates the public and private life of a legendary flier, bringing her back to earth as a courageous woman who dreamed and dared all." —Christian Science Monitor

"Rich is a gifted writer ... A fascinating and inspirational tale of Earhart's fight for equal rights, international peace, and a world where flying would be accessible to all." —San Francisco Chronicle

Doris L. Rich's varied career as a reporter, writer, photographer, and teacher has taken her all over the world, from Michigan to Guam, Korea, Shanghai, Bangladesh, and Africa. She is also the author of Queen Bess: Daredevil Aviator (Smithsonian, 1993).
Loading...
or
Not Currently Available for Direct Purchase