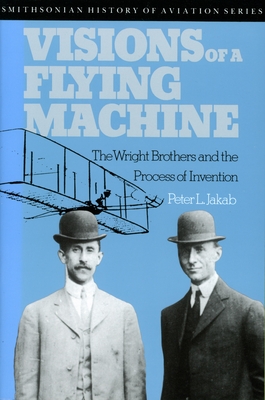 Visions of a Flying Machine

The Wright Brothers and the Process of Invention

This acclaimed book on the Wright Brothers takes the reader straight to the heart of their remarkable achievement, focusing on the technology and offering a clear, concise chronicle of precisely what they accomplished and how they did it. This book deals with the process of the invention of the airplane and how the brothers identified and resolved a range of technical puzzles that others had attempted to solve for a century.

Step by step, the book details the path of invention (including the important wind tunnel experiments of 1901) which culminated in the momentous flight at Kitty Hawk in 1903, the first major milestone in aviation history. Enhanced by original photos, designs, drawings, notebooks, letters and diaries of the Wright Brothers, Visions of a Flying Machine is a fascinating book that will be of interest to engineers, historians, enthusiasts, or anyone interested in the process of invention.

Praise For Visions of a Flying Machine: The Wright Brothers and the Process of Invention…

“The Wrights, as Jakab skillfully demonstrates, were masters at thinking visually and translating abstractions into real hardware. . . Clearly written and copiously documented, Visions of a Flying Machine . . . is an excellent case study of the innovation process.”—Journal of American History

“Fascinating. . . . This is a knowledgeable book, rich in detail and skillfully written. It is a valuable addition to our understanding of the Wright brothers and to the process of invention and engineering.”—American Historical Review

“[An] excellent book.”—Skyways/World War I Aero

“Illuminating and highly valuable. . . . Visions of a Flying Machine is a must for historians of science and technology, and good reading for all.”—Isis

Peter L. Jakab is curator of early aviation at the National Air and Space Museum and the co-editor of The Published Writings of Wilbur and Orville Wright (Smithsonian Institution Press, 2004). He lives in Virginia.
Loading...
or
Not Currently Available for Direct Purchase