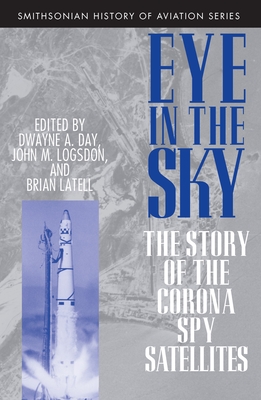 Eye in the Sky (Paperback)

The Story of the CORONA Spy Satellites

Presenting the full story of the CORONA spy satellites' origins, Eye in the Sky explores the Cold War technology and far-reaching effects of the satellites on foreign policy and national security. Arguing that satellite reconnaissance was key to shaping the course of the Cold War, the book documents breakthroughs in intelligence gathering and achievements in space technology that rival the landing on the moon.

DWAYNE DAY is senior program officer for the National Research Council/National Academy of Sciences. He is also a prolific and acclaimed space historian who served on a board investigating the space shuttle Columbia tragedy.

Praise For Eye in the Sky: The Story of the CORONA Spy Satellites…

“This book chronicles in satisfying detail the origins of US satellite reconnaissance by focusing on the pioneering CORONA program, under which some 800,000 satellite images were made between 1960 and 1972.”—Scientific American

“Day (a research associate at the Space Policy Institute at George Washington Univ.), Logsdon (director of the Space Policy Institute), and Latell (editor of the CIA's journal Studies in Intelligence) have gathered together essays by many figures active in the program, producing a fascinating record of the evolution and impact of this crucial and revolutionary program.”—Kirkus Reviews
or
Not Currently Available for Direct Purchase
Copyright © 2020 American Booksellers Association