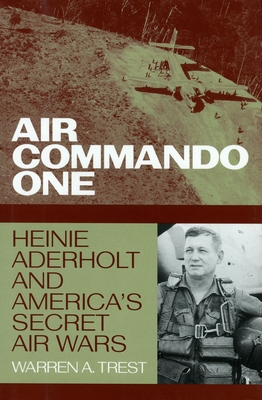 Air-dropping agents deep behind enemy lines in clandestine night missions during the Korean War, commanding secret flights into Tibet in 1960 to support the anticommunist guerilla uprising, participating in plans for the 1962 Bay of Pigs invasion—even before the escalation of the Vietnam War, Brigadier General Harry C. “Heinie” Aderholt worked at the heart of both the U.S. Air Force and CIA special operations worldwide. In 1964 he became commander of the famed First Air Commando Wing, fighting to build up special operations capabilities among the American and South Vietnamese airmen. In 1966 and 1967 he and his men set the record for interdicting the flow of enemy trucks over the Ho Chi Minh Trail in Laos and North Vietnam.

Drawing on official records, personal papers, and interviews with Aderholt and many who worked with him, Air Force historian Warren A. Trest details the life and career of this charismatic, unconventional military leader who has become a legend of the Cold War Air Force. He tells how Aderholt’s vigorous support of low-flying, propeller-driven aircraft and nonnuclear munitions pitted him against his superiors, who were steeped in doctrines of massive retaliation and “higher and faster” tactical air power. In the mid-1960s Aderholt’s clash with Seventh Air Force Commander General William W. Momyer reflected a schism that still exists between the traditional Air Force and its unconventional special operations wings. The book also integrates U.S. Air Force and CIA accounts of some of the most pivotal events of the past fifty years.

“Informed readers in military aviation and/or history should be interested in this biographical account of Aderholt's Air Force career.”—Library Journal

WARREN A. TREST is a former United States Air Force senior historian. He was a combat reporter and air power historian in the Korean and Vietnam Wars and the Cold War. Serving with the Third Infantry Division in Korea, he received a Purple Heart and Bronze Star while reporting on the war. During his thirty-plus years as a military historian, he has authored and coauthored more than 50 histories and studies.
Loading...
or
Not Currently Available for Direct Purchase