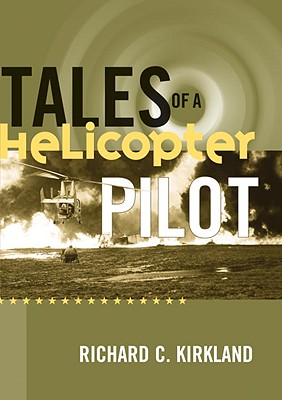 Tales of a Helicopter Pilot

Richard Kirkland is legendary for his P-38 Lightning missions in the South Pacific theater during WWII. After the war, he realized the potential of Igor Sikorsky’s new flying machine, and he traded in his fighter-pilot wings for rotors. The nerve-racking chopper missions he has flown are the stuff of legend: scrambling to evacuate president Harry Truman after an unthinkable “code red one” alert comes over his red phone; bantering with the real “Hawkeye” at a MASH unit before flying into North Korea to rescue wounded soldiers. Equally riveting are his accounts of a medevac pilot in Vietnam who lands a ten ton CH-46 “Frog” in the jungle at night, with no lights, under fire, with only a soldier’s cigarette lighter for reference; and an aerial tour pilot who routinely pulls people out of the water above, below, and right before Niagara Falls.

RICHARD C. KIRKLAND, born in 1923, was raised in a rural community in California during the Great Depression. At the outbreak of WWII he joined the Army Air Corps and served in the famous "Flying Knights" Fighter Squadron with Major Dick Bong, America's all time ace of aces. Lt. Kirkland flew 103 combat missions in P-38 and P-47 fighters dogfighting Japanese Zeros, attacking enemy installations, ships, and flying escort for bombers. After WWII, Lt. Kirkland was assigned to a top secret project of testing atomic bombs in the Marshall Islands.

During the Korean War, Captain Kirkland traded his wings for rotors and flew 69 helicopter missions rescuing downed pilots from behind enemy lines and snatching wounded soldiers from the battlefield at the 8055 MASH, home of the infamous "Hawkeye." Major Kirkland was awarded the Distinguished Flying Cross, five Air Medals, the Air Force Commendation Medal and both the U.S. and Korean Presidential citations for his service in WWII and the Korean War.

Richard sketched and painted his surroundings as a boy in California, writing short stories to match his artwork. During his military service he continued, sketching and painting his surroundings, capturing history as it occurred. He used his art for inspiration in his writing. He has written and published numerous magazine short stories and articles, and four books about his experiences. His last book "Wide Place in the Road," is historic fiction, based on true historic incidents with real characters that Richard knew and associated with during the span of the book from the Great Depression through WWII.

Richard is very active at 89 and speaks regularly at various civic, social, and historic societies. He has been a featured speaker at the National Press Club in Washington D.C., and was interviewed on both the American and Canadian History Channels. He and his wife Maria, who is also an artist, have nine children, sixteen grandchildren and one great grandson.
Loading...
or
Not Currently Available for Direct Purchase