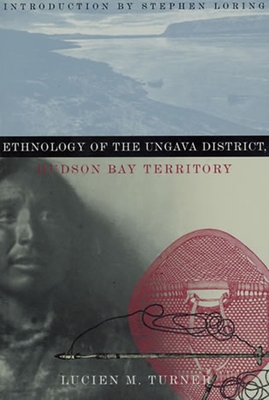 Lucien Turner arrived at the present-day community of Kuujjuaq on the northern Quebec-Labrador peninsula in 1882. As with his earlier long-term appointments in Alaska, he primarily conducted meteorological, atmospheric, and tidal observations for the U.S. Army's Signal Corps. But he also developed a meaningful rapport with the Innu and Inuit, spending his free time studying and recording not only their material culture—including clothing, dwellings, weapons, and tools—but also their lifeways, language, and stories. His images of these people and their camps are among the earliest examples of photography of the Arctic. As Stephen Loring Notes in the introduction, "With few exceptions—Inuit shamanistic paraphernalia and Innu hunting charms—the majority of the materials Turner collected were artifacts and clothing used in day-to-day activities. The passage of time and the miracle of conservation have transformed these ethnographic minutiae, these objects and materials of relatively minor significance on the past, into treasured cultural icons." Especially notable for Lucien Turner's descriptions of nineteenth-century Native material culture, Ethnology of the Ungava District, Hudson Bay Territory was originally published in 1894 as part of the Smithsonian's Annual Report of the Bureau of American Ethnology series—often considered to mark the beginning of American anthropological studies. This reissue ensures that Turner's work continues to be a classic introduction to the culture of the Innu and Inuit people of northern Quebec and Labrador.

This is a republished version of Turner's 1894 classic ethnography. . . . The initiative to republish the work came from Innu and Inuit organisations themselves. . . . Loring's 32-page introduction is particularly useful for situating this work. (Anderson, David G., Social Anthropology)

Lucien M. Turner (1848-1909) contributed significantly to the collections of the Smithsonian Institution; he was the author of Contributions to the Natural History of Alaska (1868).

Stephen Loring is an anthropologist at the Arctic Studies Center of the Smithsonian's National Museum of Natural History.
Loading...
or
Not Currently Available for Direct Purchase