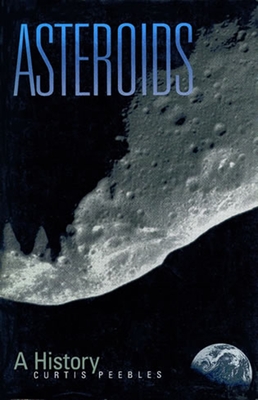 Asteroids suggest images of a catastrophic impact with Earth, triggering infernos, tidal waves, famine, and death -- but these scenarios have obscured the larger story of how asteroids have been discovered and studied. During the past two centuries, the quest for knowledge about asteroids has involved eminent scientists and amateur astronomers, patient research and sudden intuition, advanced technology and the simplest of telescopes, newspaper headlines and Cold War secrets. Today, researchers have named and identified the mineral composition of these objects. They range in size from 33 feet to 580 miles wide and most are found in a belt between the orbits of Mars and Jupiter.

Covering all aspects of asteroid investigation, Curtis Peebles shows how ideas about the orbiting boulders have evolved. He describes how such phenomena as the Moon's craters and dinosaur extinction were gradually, and by some scientists grudgingly, accepted as the results of asteroid impacts. He tells how a band of icy asteroids rimming the solar system, first proposed as a theory in the 1940s, was ignored for more than forty years until renewed interest and technological breakthroughs confirmed the existence of the Kuiper Belt. Peebles also chronicles the discovery of Shoemaker-Levy 9, a comet with twenty-two nuclei that crashed into Jupiter in 1994, releasing many times the energy of the world's nuclear arsenal.

Showing how asteroid research is increasingly collaborative, the book provides insights into the evolution of scientific ideas and the ebb and flow of scientific debate.

Praise For Asteroids: A History…

Asteroids are many things to many people. For some observers, those "mountains in the sky" point to the cataclysmic origins of the universe. Others see untold wealth in the planetary fragments, which harbor great stores of precious metals. Still others see in asteroids the likelihood of global destruction--after all, one of them, slamming into the earth millions of years ago, may very well have condemned the dinosaurs to extinction, and deep space harbors untold potential threats to the earth.
In this engaging volume, Curtis Peebles surveys the science of asteroids, offering a highly readable account of the many ways in which they form out of the flotsam and jetsam of larger celestial bodies, the dust and debris of space. He adds to this scientific overview an anecdotal history of asteroid discovery and detection, which, he writes, was often the work of gifted astronomers working with less than ideal equipment, and all too often dismissed by their professional counterparts. Peebles discusses in detail the rules by which asteroids are catalogued and named--some, for instance, bear the monikers of eminent scientists, others of their patrons, and still others of more unlikely honorees, such as the group of asteroids named for the various Beatles. He also touches on efforts to protect Earth from asteroid impacts--the father of that planetary defense being none other than the poet Lord Byron--which he calls "the only natural disaster that human society can prevent."
Students of the history of space science will profit from Peebles's careful research, while astronomy buffs will enjoy his lucid narrative. (Gregory McNamee, Amazon.com)

Numerous and relatively small, asteroids once merited no more from leading astronomers than contemptuous dismissal as "the vermin of the skies." But these small celestial wanderers have garnered considerable attention in recent years as the likely cause of the dinosaurs' demise and as a possible threat to our own survival as a species. Peebles puts the latest developments in asteroid science in their proper place in a history that dates back to Kepler's inspired guess at locating the asteroid belt. Advanced by both poorly equipped amateurs and by world-renowned professionals, the study of asteroids has repeatedly shattered scientific orthodoxies, forcing theorists to rethink the structure of the solar system and the history of our own planet, while spurring observers to devise new astronomical techniques and equipment. In recounting controversies sparked by asteroid research, Peebles transports readers far beyond Jupiter and then back again, to a huge crater in northern Arizona. The Arizona crater, as it turns out, may help solve the mystery of the dinosaurs' extinction, even as it forces international debates over the need for a planetary defense against an asteroid catastrophe. Peopling his real-life chronicle with unpredictable personalities and punctuating it with feats of intellectual wizardry, Peebles leaves mere science fiction far behind. (From Booklist; Bryce Christensen; Copyright © American Library Association. All rights reserved.)

Asteroids: A History includes an astonishing numbero f facts about the discovery, the naming and the fate of the stepchildren of the solar system. . . . Peebles provides an informative discussion of the pivotal role played by technology in the discovery of smaller and smaller members of this chaotic family. (Astronomy)

In recounting controversies sparked by asteroid research, Peebles transports readers far beyond Jupiter and then back again, to a huge crater in northern Arizona. . . . Peopling his real-life chronicle with unpredictable personalities and punctuating it with feats of intellectual wizardry, Peebles leaves mere science fiction far behind. (Booklist)

Curtis Peebles has published ten books and more than forty articles. He is the author of Watch the Skies: A Chronicle of the Flying Saucer Myth (1994) and coauthor of Flying Without Wings (1999), both published by the Smithsonian Institution Press.
Loading...
or
Not Currently Available for Direct Purchase