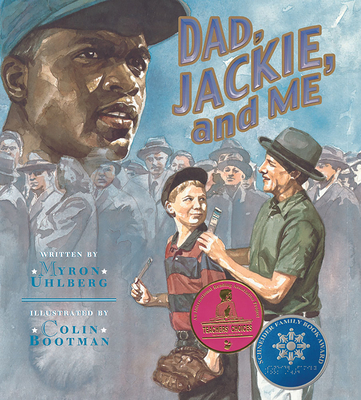 Dad, Jackie, and Me

"It was Opening Day, 1947. And every kid in Brooklyn knew this was our year. The Dodgers were going to go all the way!"
It is the summer of 1947 and a highly charged baseball season is underway in New York. Jackie Robinson is the new first baseman for the Brooklyn Dodgers—and the first black player in Major League Baseball. A young boy listens eagerly to the Dodgers games on the radio, each day using sign language to tell his deaf father about the games. His father begins to keep a scrapbook, clipping photos and articles about Jackie. Finally one day the father delivers some big news: they are going to Ebbets Field to watch Jackie play!
Author Myron Uhlberg offers a nostalgic look back at 1947, and pays tribute to Jackie Robinson, the legendary athlete and hero. Illustrator Colin Bootman's realistic, full-color illustrations capture the details of the period and the excitement of an entire city as Robinson and the Dodgers won the long-awaited pennant and brought an entire New York community together for one magical summer.

Praise For Dad, Jackie, and Me…

"An affecting tribute to Robinson, to a dedicated son and to a thoughtful, deep-feeling father. And, of course, to baseball."—Publishers Weekly

"It takes the young Uhlberg, narrator of the story, a while to overcome his embarrassment at his father's attempts to cheer for Robinson. . . but eventually Dad's devotion wins the day in a moving finale. Colin Bootman, who earned a Coretta Scott Honor Award for Almost to Freedom (2003), uses evocative watercolors rich in soft browns and lush greens to capture both the feel of the 1940s (fedora-wearing fans) and the electricity of Robinson's play."—Booklist

"Bootman's lovely watercolor paintings add detail and wistful nostalgia. . . [readers] will appreciate the story's insightful treatment of deafness as viewed through the eyes of a child."—School Library Journal

Myron Uhlberg is the award-wining and critically acclaimed author of several children's books. Uhlberg is the first-born son of two deaf parents. His first language was ASL (American Sign Language). After graduating from Brandeis University, he served as a paratrooper in the 82nd Airborne Division. He then spent the next forty years in the garment industry. His first book was published when he was sixty-six years old. He has appeared on NPR's Talk of the Nation and was featured in the Ken Burns documentary film, Jackie Robinson. He lives in California.

Colin Bootman was born in Trinidad but moved to the United States at the age of seven. A graduate of the School of Visual Arts in New York, he has illustrated numerous books for children, including Almost to Freedom, a Coretta Scott King Illustrator Honor Book. He lives in New York.
Loading...
or support indie stores by buying on
(This book is on backorder)