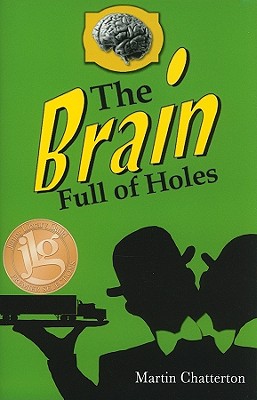 The Brain Full of Holes

The Brain and his sidekick Sheldon McGlone are back, encountering parallel universes, flying cows, carnivorous cuckoo clocks, and shrinking scientists.
Sheldon McGlone has just moved to Switzerland because his mother has married a member of an elite--and secretive--international scientific squad. And now Sheldon's best friend, The Brain, is also his stepbrother
But when The Brain notices that the Swiss cheese has no holes, and Sheldon discovers his can of Floop soda has no bubbles, the boys realize something is definitely not right. Then Helga Poom arrives. Her father has disappeared and she needs their help to find him.
Soon Sheldon, The Brain, and Helga are drawn into the crazy, particle-shifting world of quantum physics and a dangerous adventure where nothing is as it should be.
Author Martin Chatterton has once again crafted a delightfully imaginative mystery story featuring an over-the-top storyline and a memorable cast of characters. Readers will love the surprising and occasionally hilarious plot twists.