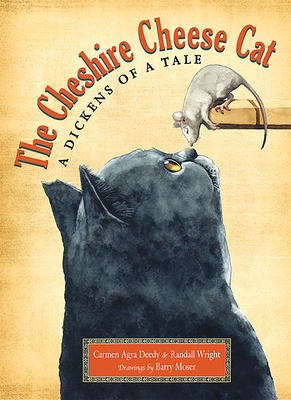 A Dickens of a Tale

In this playful homage to Charles Dickens, Skilley, an alley cat with an embarrassing secret, longs to escape his street-cat life.
Hoping to trade London's damp alleyways for the warmth of ye olde Cheshire Cheese Inn, Skilley strikes a bargain with Pip, an erudite mouse. Skilley will protect the mice who live at the inn, and in turn, the mice will provide Skilley with the thing he desires most. But when Skilley and Pip are drawn into a crisis of monumental proportions, their new friendship is pushed to its limits. The escalating crisis threatens the peace not only of the Cheshire Cheese Inn but the entire British Monarchy!
New York Times best-selling author Carmen Agra Deedy and coauthor Randall Wright collaborate on this compelling story set in Victorian England. With the artwork of award-winning illustrator Barry Moser, The Cheshire Cheese Cat is filled with charming characters and strong themes of friendship and loyalty.

Praise For The Cheshire Cheese Cat: A Dickens of a Tale…

★ "The fast-moving plot is a masterwork of intricate detail that will keep readers enthralled, and the characters are well-rounded and believable. Language is a highlight of the novel; words both elegant and colorful fill the pages. . . Combined with Moser's precise pencil sketches of personality-filled characters, the book is a success in every way. It should be a first purchase for libraries interested in bringing young readers to the marvels of Dickens via the back – or, should I say tavern – door." —School Library Journal, Starred Review

★ "Readers with great expectations will find them fully satisfied by this tongue-in-cheek romp through a historic public House that is the very opposite of Bleak." —Kirkus Reviews, Starred Review

"Whether you come to this book as an English major or as a cat lover, you will agree the first line of 'The Cheshire Cheese Cat' is pure genius. . . This joint effort from Carmen Agra Deedy and Randall Wright, illustrated charmingly by Barry Moser, might be best appreciated as a read-aloud. It is sure to spark dialogue about loyalty and bullying. . . and Anglophiles young and old will appreciate the tale of Maldwyn, an injured raven hiding out at the Cheese and plotting his return to this rightful role guarding the Tower of London. . . " —The New York Times

Carmen Agra Deedy is a New York Times best-selling author and renowned storyteller. Her books have received numerous awards and honors. Carmen has performed in many prestigious venues, but children are her favorite audience. Born in Havana, Cuba, she came to the United States as a refugee and like most immigrants sees the world from multiple perspectives. She lives in Georgia.

Randall Wright loves tales by the fireside, mouthwatering feasts, and musty old books. The author of several middle grade novels, he currently lives with his wife and children in a small castle in the kingdom of Utah. To his regret, his castle has no moat or towers, or even stone walls, as they would tend to annoy his neighbors.

Born in Chattanooga, Tennessee, Moser studied at Auburn University and the University of Tennessee at Chattanooga, and did post-graduate work at the University of Massachusetts at Amherst. He is the acclaimed illustrator of more than two hundred books for adults and children, including In the Beginning by Virginia Hamilton, which was a Newbery Honor Book. He is also a printer, painter, printmaker, designer, author, essayist, and teacher. He lives in Massachusetts.
Loading...
or
Not Currently Available for Direct Purchase