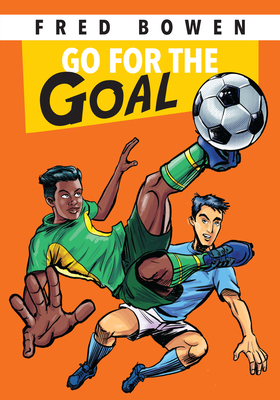 Josh is so excited when he earns a spot on the United, an elite travel soccer team with exceptionally talented players. So why can't they win a game?
Despite grueling practices and talent, Josh's teammates are prone to hogging the ball and seem to only play for themselves. He begins to wonder if made a mistake leaving his old team. But just when he's about to give up, Josh learns that the 1999 United States Women's World Cup team faced similar difficulties the year they won it all. Can Josh convince his coach (and his team) to use team-building exercises like the U.S. women's team used to make them stronger?
Fred Bowen returns with another edge-of-your-seat Sports Story Series title emphasizing the important values of teamwork and relationships. An afterword offers more information about the 1999 United States Women's World Cup team.

"Soccer fans will love Go for the Goal! and so will anyone who's ever played a sport and understands the importance of working as a team."—US Kids Magazine

Fred Bowen was a Little Leaguer who loved to read and is still a lifelong sports fanatic. He is the author of the action-packed Fred Bowen Sports Story series, currently totaling more than twenty titles. For thirteen years, Bowen coached kids' baseball and basketball teams. He has also written a weekly sports column for kids in the Washington Post since 2000. He was a lawyer for many years before retiring to become a full-time children's book author.Bowen lives in Silver Spring, Maryland, with his wife Peggy Jackson. They have two grown children.
Loading...
or
Not Currently Available for Direct Purchase