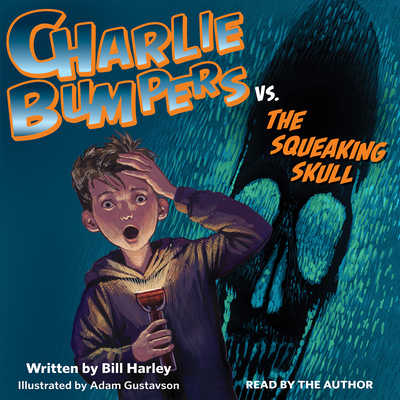 Charlie Bumpers vs. the Squeaking Skull

Can Charlie Bumpers face his fear of horror movies, come up with a genius costume, and enjoy Halloween?

Fourth graders Charlie and Tommy have big plans for Halloween. They're going to trick-or-treat and sleep over at Alex's house. But when Charlie finds out that the entertainment at the party will be the "Scariest Horror Movies Ever," he is struck by panic. Charlie loves candy, he loves sleepovers with his friends, but he absolutely hates horror movies.

There is yet another wrinkle in Charlie's Halloween plans. He is determined to win the big prize (ten movie tickets) that will be awarded for the best costume, but when he finally comes up with a genius prize-winning idea, he runs into an unexpected obstacle. How will Charlie be able to enjoy Halloween this year?

Praise For Charlie Bumpers vs. the Squeaking Skull…

"Harley develops all of Charlie's concerns with a nice sense of balance and levity, and Gustavson's uncommonly good spot illustrations are frequent, adding notes of creepiness or humor at all the right places." —Booklist

"Fans of the [audiobook] series will enjoy this third installment, and those new to Charlie will have no trouble following along." —School Library Journal