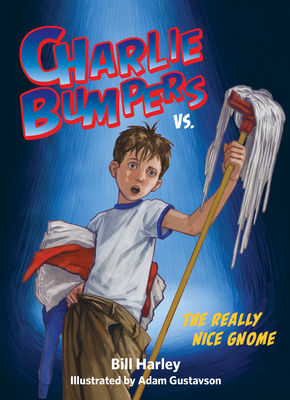 Charlie Bumpers wants to play the bad guy in the class play, but his teacher Mrs. Burke has other ideas.

Charlie Bumpers has his heart set on playing the role of the evil Sorcerer in the fourth-grade play. But his dreams of villainous stardom go up in smoke when he finds out that Mrs. Burke has cast him as the Nice Gnome! Determined to rectify this terrible injustice, Charlie concocts one plan after another, but nothing seems to work.

To make matters worse, his dad has assigned chores to all the kids in the family, and Charlie's job is walking Ginger—the diggiest, sniffiest, and poopiest dog in the universe. Can Charlie deal with these challenges without causing havoc all around him?

Praise For Charlie Bumpers vs. the Really Nice Gnome…

"A storyteller with an uncanny sense of elementary school humor, Harley has penned a worthy sequel to Charlie Bumpers vs. The Teacher of the Year (2013). With illustrator Gustavson, he captures the frustration that comes with just having to make the best of a bad situation." —Kirkus Reviews

"A heartwarming and sometimes laugh-out-loud tale about giving 100 percent even when you're less than thrilled to do so. . . [L]isteners will be eager to find out how his adventure unfolds." —School Library Journal