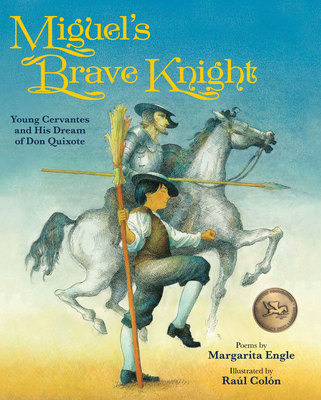 Young Cervantes and His Dream of Don Quixote

Miguel de Cervantes Saavedra finds refuge from his difficult childhood by imagining the adventures of a brave but clumsy knight.

This fictionalized first-person biography in verse of Miguel de Cervantes Saavedra follows the early years of the child who grows up to pen Don Quixote, the first modern novel. The son of a vagabond barber-surgeon, Miguel looks to his own imagination for an escape from his family's troubles and finds comfort in his colorful daydreams.

At a time when access to books is limited and imaginative books are considered evil, Miguel is inspired by storytellers and wandering actors who perform during festivals. He longs to tell stories of his own. When Miguel is nineteen, four of his poems are published, launching the career of one of the greatest writers in the Spanish language.

Award-winning author Margarita Engle's distinctive picture book depiction of the childhood of the father of the modern novel, told in a series of free verse poems, is enhanced by Raúl Colón's stunning illustrations. Back matter includes a note from both the author and illustrator as well as additional information on Cervantes and his novel Don Quixote.

Praise For Miguel's Brave Knight: Young Cervantes and His Dream of Don Quixote…

★ "Colón's pen-and-ink and watercolor illustrations are paired perfectly with the text and the subject. . . This expressive picture book biography presents a solid argument for why Cervantes should be revered as an important figure in the Western canon. A gorgeous and well-crafted work for all nonfiction collections."—School Library Journal, Starred Review

"Poems about contemporaneous events—the plague, book burning—add depth to Engle's representation of the era. Colón's noble portraits, done in pen, ink, and watercolor, recall the work of classic popularizers such as N.C. Wyeth and the D'Aulaires. Even readers who don't progress to Cervantes's own work will come away with an indelible sense of the story and its creator."—Publishers Weekly

★ "Engle's poems are lyrical yet direct. . . Colón's pen, ink, and watercolor illustrations (inspired by the prints of Gustav Doré) accompany every poem bringing Engle's words into sharp focus. . . . An intriguing, lightly fictionalized introduction to an iconic author, this will encourage readers to learn more about the first modern novel."—Booklist, Starred Review

★ "Beautiful and engaging, this book will inspire readers to find out more."—Kirkus Reviews, Starred Review

Margarita Engle is the Cuban American author of many verse books, including a Newbery Honor winner, The Surrender Tree; a PEN USA Award winner, The Lightning Dreamer; and a verse memoir, Enchanted Air, winner of many awards, including an inaugural Walter Dean Myers Award Honor. Margarita's books have also received three Pura Belpré Awards and four Américas Awards, as well as a Jane Addams Award, International Reading Association Award, and the Charlotte Zolotow Award. In 2017, the Poetry Foundation named her the Young People's Poet Laureate. Margarita grew up in Los Angeles but developed a deep attachment to her mother's homeland during summers with her extended family in Cuba. She was trained as a botanist and agronomist before becoming a full-time poet and novelist.

Raúl Colón was born in New York City in December of 1952 and moved with his parents in the 1960s to Caguas, Puerto Rico, where he studied commercial art. Colón is a versatile and acclaimed illustrator whose work has appeared in important national publications. An award-winning illustrator of over thirty books for children, Colón has received a Golden Kite Award, a Pura Belpré Award, and both a gold and silver medal in The Original Art show. He lives in New City, New York.
Loading...
or support indie stores by buying on