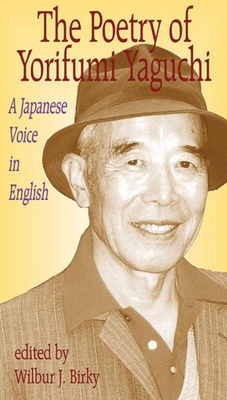 A Japanese Voice In English

Yorifumi Yaguchi is a nationally known poet in Japan. He was a child during World War II, watching while bombs split his countryside to pieces, while the neighbor girl fell prey to soldiers, while an American soldier crept into his home, hoping for rest and safety. Yaguchi's grandfather, a devout Buddhist priest, taught him peaceful ways, urged him to build a healed world. His father taught him the Shinto way, emperor-worship, and the nationalism that fueled Japan's World War II military efforts.           The War focused Yaguchi's poetic abilities instead of destroying them, says Wilbur Birky, the editor of this volume of 150 of Yaguchi's poems in English. Six sections form this collection -- "Silence," "Child of War," "Horizon," "Breath of God,' "Words Made Flesh," and "War and Peace." The poems cover the span of Yaguchi's life -- and his career as a poetry professor and editor, as a Mennonite Christian pastor, and as a nationally recognized, still-practicing poet.

Nationally acclaimed poet and translator Yorifumi Yaguchi was born November 1, 1932, in Ishinomaki, Miyagi Prefecture, Japan. His poetry has appeared in numerous publications in Japan and elsewhere. His translations have included the work of American poets Anne Sexton and John Hollander, and he was for many years the poetry editor of the respected journal Poetry Nippon. He graduated from Tohoku Gakuin University with a bachelor's degree in English, from the International Christian University with a master's degree in education, and from Goshen Biblical Seminary in Indiana with a master's degree in theology. Yaguchi is the author of numerous volumes of poetry in both English and Japanese. A longtime peace activist and Mennonite pastor in Japan, he is retired from teaching American poetry in the literature department of Hokusei Gakuen College in Sapporo, Japan. He and his wife, Mitsuko, live in Sapporo. They have two sons, Yobu and Yujin. Translators and editorial assistants Clive Collins and Yujin Yaguchi teach in the College of Arts and Sciences at the University of Tokyo in Japan.
or
Not Currently Available for Direct Purchase
Copyright © 2020 American Booksellers Association