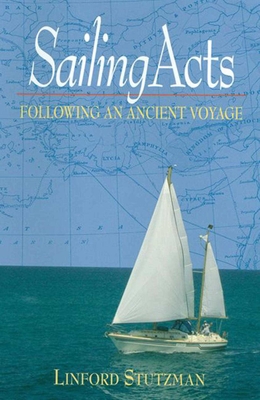 For those who love sailing and you-are-there travel literature. Also for those who enjoy studying the life and times of the Apostle Paul. But definitely for those who love adventure, or at least reading about it! Seafaring isn't for the faint of heart. It wasn't for the Apostle Paul in the first century A.D.—shipwrecked, imprisoned, and often a stranger in foreign lands. And it turned out to be a heart-stopping task some two thousand years later, when a religion professor and his wife undertook a 14-month journey by sailboat! They stopped in eight countries, visiting every site where Paul stopped on his tumultuous missionary journeys.           "Sailing Acts" traces this 21st-century voyage from Volos, Greece, to Rome, Italy, by car, by foot, by motorized scooter, but mostly on a 33-foot boat, logging more than 3600 nautical miles over two sailing seasons. "Explorers are easy to admire or despise, but very difficult to understand without going on the trip," writes Stutzman. "To really appreciate the experiences, the drama, and development of Paul the explorer, you need to sail with him."           So begins Sailing Acts, inviting readers to come on board. Stutzman draws thoughtful comparisons from his own travel mishaps and adventures to the ones Paul experienced on his journeys. This book is in the tradition of Bruce Feiler's Walking the Bible. Stutzman's knowledge of the socio-political setting in the first-century Roman empire provides an informative backdrop to understanding Paul and reading his epistles in a new light. The book includes dozens of photos, maps showing the couple's travel routes, a list of all the repairs and replacements Stutzman made to the aging boat which he bought sight-unseen, and an itinerary of places they visited.

Linford Stutzman was born in the logging community of Cascadia, Oregon. He learned many of his carpentry and mechanical skills by working alongside his father who was a farmer, logger, and pastor of the community church. Linford's teenage years were spent in the remote interior of British Columbia, Canada. There he worked for the Canadian forestry service, fisheries, at a hunting lodge, and in mining exploration. Linford and his wife Janet have lived in Jerusalem, Israel; Munich, Germany; and in Perth, Australia. They have two grown sons, David and Jonathan. Linford holds a Ph.D. from The Catholic University of America, a master's degree in Religion from Eastern Mennonite Seminary, and a bachelor's degree in Bible from Eastern Mennonite University. Since 1993 he has been teaching courses in religion, culture, and mission at Eastern Mennonite University. Together, Linford and Janet have led Eastern Mennonite University's cross-cultural study semester to the Middle East numerous times, as well as summer-study programs to Albania, Lithuania, Greece, and Turkey. In the summers, they continue to explore the Mediterranean aboard SailingActs.
Loading...
or
Not Currently Available for Direct Purchase